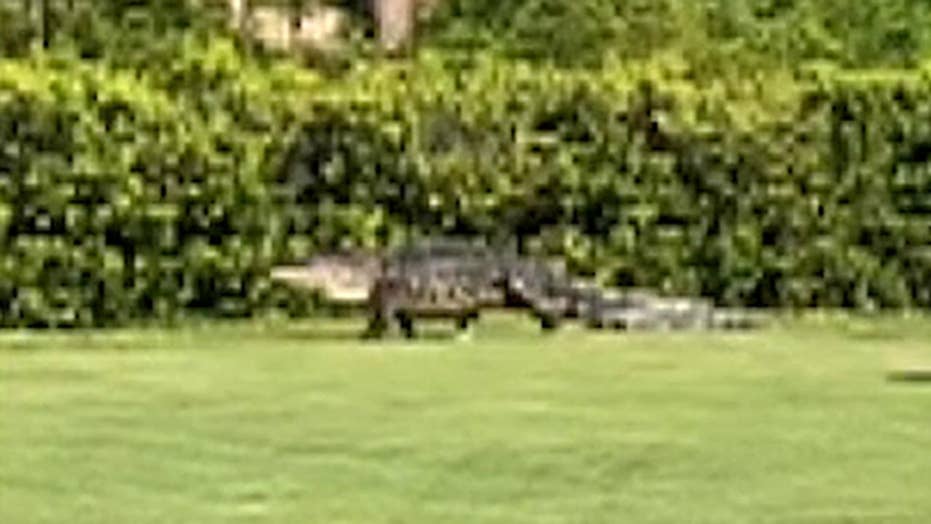 Golfers kept a safe distance as the lumbering reptile made its way across the fairway at the Long Cove Club golf course in South Carolina.

A huge alligator decided to take a stroll through a South Carolina golf course on Tuesday morning.

The 10-foot-long, 400-pound gator was seen walking through the Long Cove Club in Hilton Head before ending his journey in another lagoon, The Island Packet reported.

“It was moving from one lagoon to the next, and the golf course and the driving range were in the way,” assistant golf pro Cory Grimes told the outlet.

He went on to say that the club has several alligators in its lagoons and the one spotted Tuesday wasn’t even its biggest.

“It’s not the biggest, but it’s one of the bigger ones,” he said.

This 10-foot long alligator strolled through the Long Cove Club in Hilton Head, S.C., on Tuesday morning on its way to another lagoon at the club. According to a local outlet, the gator weighed 400 pounds. (Long Cove Club/Ashley Davis)

Long Cove Club posted a video of the gator walking across the greens, as well as a picture of the enormous reptile resting beside the driving range.

“Our special guest was running late for his tee time this morning at Long Cove Club!” the club captioned the image.

In response to the photo, one person wrote: “Yikes he is a big one!!!”

Another person gave the gator a nickname in their comment, saying: “Big Al goes where he wants. Usually in lagoon around 11th tee.”

“He was just looking for an early happy hour,” someone else joked.

One person admired the huge alligator, saying: “What an amazing creature....”

Someone else suggested the gator had a purpose for walking around the course.

“I think it’s mating time so they move from pond to pond,” the person suggested.

According to the South Carolina Department of Natural Resources (DNR), alligators begin courting in April and breed in late May and early June.

Warmer weather also revs up the prehistoric predators' metabolism, making them more active and aggressive as they hunt for prey and mate in the coastal South.

The Florida Fish and Wildlife Conservation Commission recommends not swimming during dusk or dawn, an alligator’s most active hours, keeping animals on a leash and away from water and keeping a safe distance away from the animal.