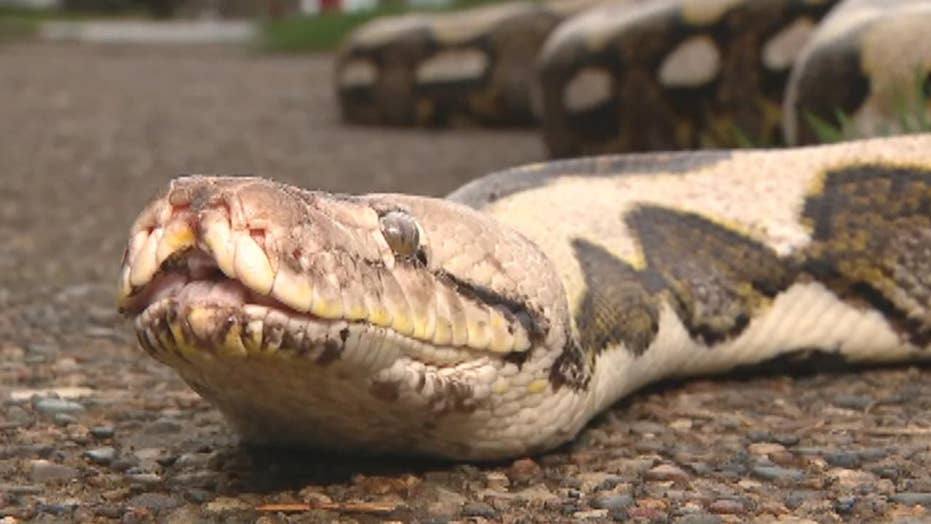 Raw video: An eight-year-old reticulated python named Juliet escapes owner’s cage, slithers onto the roof of a garage in Detroit, Michigan. Owner admits he must not have locked pet snake in cage.

An Australian woman was sipping her coffee when she noticed some feathers flying around outside. As she looked out of a window behind her, she was shocked to discover a large snake coiled around a tawny frogmouth — a stocky bird that resembles an owl.

Nicola Moore quickly took to Facebook to share photos of the horrific sight, noting in one picture you can see the jaw of the snake, identified as a carpet python, around the bird's head.

"Tawny Frogmouth is like an owl. The snake is a constrictor, so not venomous, but pretty fond of squeezing," Moore explained to curious Facebook users earlier this month. "This guy is pretty big, probably close to 2 metres. We have other very venomous snakes."

"Pretty big coastal python to take on the owl it wont need to [eat] again for a bit and will go off in a food coma for a while. Hubby has one as a pet its amazing watching them dislocate their jaws to devour their prey ours is just under 2 mtrs long and chugs down on 8 inch rats & wont be long before they go into brumation for the winter months. Hope you get some more great photos i know my hubby would love seeing them," one friend replied.

Moore agreed that it would likely be devouring the frogmouth for "a good while."

"We have lots of photos. No need to even zoom, we can take touch them both," she replied, in part.

The woman from New South Wales then went outside to capture some video of the bizarre battle. A minute-long clip shows the snake tightening its grip around the bird's neck as it bites down on its head.

She then put her hand on the window to show viewers just how big the snake's prey really was.

And for those who were curious if the snake managed to finish its meal — Moore confirmed the snake's eyes really were bigger than its stomach.

"In the end it didn't manage to completely swallow the bird, so cats, dogs and kids would be too big. They are often kept as pets, and seen as being quite harmless. We do get a few very venomous snakes, but everyone is raised knowing how to deal with them," she explained.

A carpet snake is a non-venomous snake with a thick body covered in yellow and white speckles. It's one of the largest snakes in Australia and is a popular choice for a pet in the region, Northern Territory Government states online.