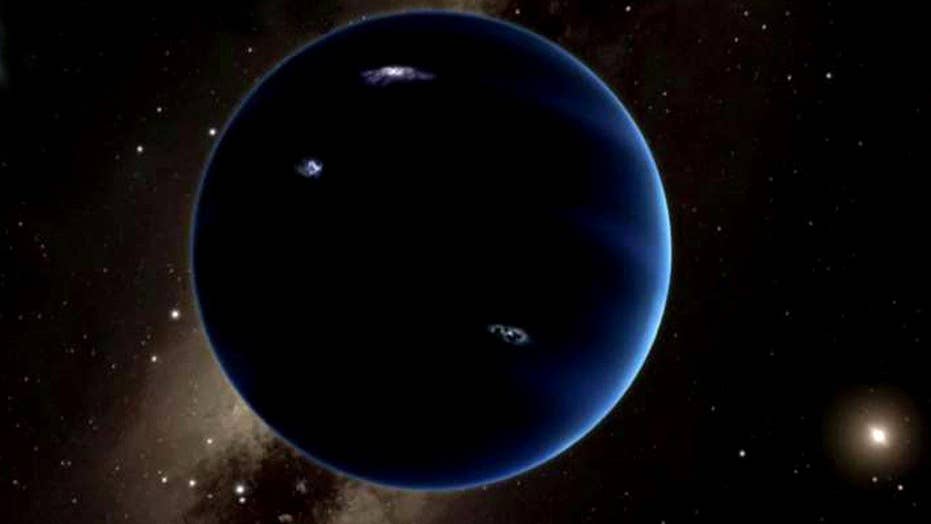 Researchers find signs of a ninth planet orbiting our sun

If Planet Nine really exists, astronomers have a pretty decent chance of spotting it.

On Jan. 20, scientists announced that a planet about 10 times more massive than Earth likely lurks in the distant outer solar system, orbiting perhaps 600 times farther from the sun than Earth does on average.

The evidence for the existence of this "Planet Nine" is indirect at the moment; computer models suggest a big, undiscovered world has shaped the strange orbits of multiple objects in the Kuiper Belt, the ring of icy bodies beyond Neptune. But direct evidence could come relatively soon, in the form of a telescope observation, Planet Nine's proposers say. [Evidence Mounts for Existence of 'Planet X' (Video)]

"It's actually not obscenely faint," said Mike Brown of the California Institute of Technology (Caltech) in Pasadena. Brown and lead author Konstantin Batygin, also of Caltech, wrote the new paper laying out the evidence for the putative planet's existence.

"In fact, it's bright enough over a lot of its orbit that we should have seen it already, if it's in the closest approaches to the sun," Brown told Space.com. Indeed, at closest approach, "you could almost see it with some backyard telescopes," he added. (Planet Nine's orbit likely brings it as close as 200 to 300 astronomical units, or AU, to the sun, and takes it as far away as 600 to 1,200 AU, Brown said. One AU is the average distance from Earth to the sun — about 93 million miles).

Planet Nine is therefore probably not too close to the sun at the moment, said Brown, who has discovered or co-discovered a number of distant solar system objects, including the dwarf planets Eris and Sedna. But powerful ground-based telescopes can probably still detect the object, wherever it may be, he added. [The Case for "Planet Nine" in Pictures]

"Even at its most distant, and at the smallest guesses of how big it is, it's like 24th or 25th magnitude," Brown said, referring to the brightness scale astronomers use, in which higher numbers denote fainter objects. "It's not crazy; this is the kind of stuff people are finding all the time. We just need to go out and cover a good swathe of the sky."

Just how big a swathe? Astronomer Scott Sheppard, of the Carnegie Institution for Science in Washington, D.C., has come up with a rough estimate: between 2,000 and 4,000 square degrees. (For perspective, the full moon as seen from Earth covers about 0.5 degrees of sky.)

That corresponds to about 50 nights of observations using a powerful instrument such as the Subaru Telescope in Hawaii, said Sheppard, who has a lot of experience finding far-flung objects in the solar system. For example, in 2014, he and Chadwick Trujillo of the Gemini Observatory in Hawaii discovered an object called 2012 VP113, whose orbital characteristics hint at the presence of a Planet Nine.

The 27-foot-wide Subaru Telescope is the go-to observatory for the search, because Planet Nine is predicted to be visible in the Northern Hemisphere sky, both Brown and Sheppard said. (Many other big, powerful scopes are in Chile, south of the equator.) [World's Largest Reflecting Telescopes Explained (Infographic)]

Sheppard stressed that it's tough to know just how detectable Planet Nine would be, considering the uncertainties surrounding the putative world's size, orbit and composition — all characteristics that affect brightness.

But, Sheppard told Space.com, "if it's not on the extreme ends of the orbit or the size, then Subaru should be able to find it."

The hunt is on

Sheppard and his colleagues have already covered some parts of Planet Nine's possible orbit using Subaru, as part of a larger, years-long survey for more objects such as 2012 VP113. (The broader survey also employs a telescope in Chile, which spotted 2012 VP113.)

The researchers will likely use Subaru to narrow in on more promising possible locations, now that Batygin and Brown have given them a better idea of where to look, Sheppard said. But the hunt for smaller bodies such as 2012 VP113 will continue as well.

"We're trying to find many more of these smaller objects, which could lead us to the bigger object," he said.

The hunt for Planet Nine will also probably send astronomers back to their archives; it's possible that the undiscovered world has already been photographed by powerful telescopes, but researchers didn't spot it, Brown said. (Confirming the planet's existence will require more than one image, because astronomers will need to see the object move to know it's not a background star or other extremely distant object.)

Sheppard said that he had pegged the odds of a big planet lying undiscovered beyond Neptune at 50-50, but the new study by Batygin and Brown boosts his confidence in the existence of Planet Nine to about 75 percent.

"I find this really compelling," Brown said. "I think it's there. But, like everybody else, I want to see it."