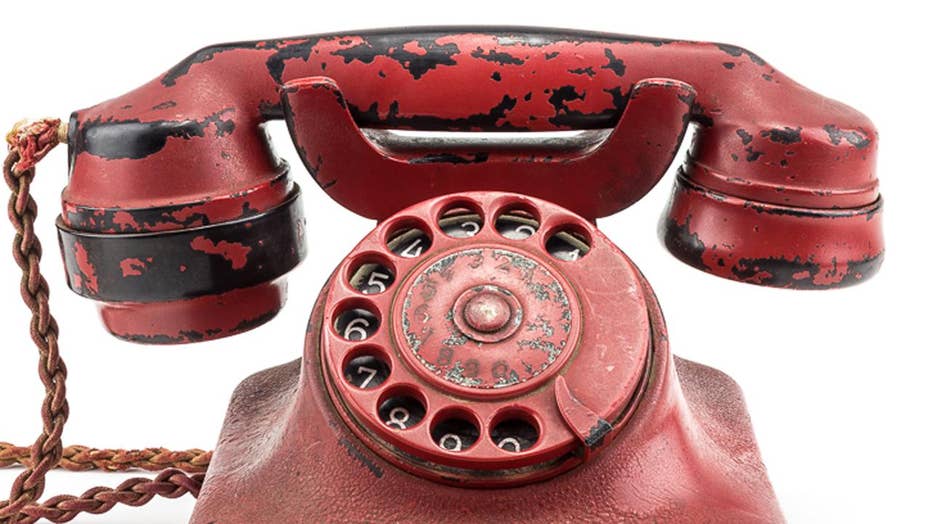 Most destructive weapon of all time for sale: Hitler’s phone

Adolf Hitler’s personal phone, described as his ‘mobile device of destruction’ and is believed to have been used to carry out deaths of millions around the world, is up for auction

The telephone Adolf Hitler used to bark out orders that led to the deaths of millions is going on the auction block. The chipped red phone, with bits of its original black showing through, is engraved on the backside with the Fuhrer's name and a swastika.

It could fetch as much as $300,000 when it goes up for sale Feb. 19. Alexander Historical Auctions in Maryland calls the Bakelite phone made by Siemens "Hitler's mobile device of destruction" and says it was "arguably the most destructive 'weapon' of all time"; he is said to have used it during the war's final two years.

Shortly after the Allied victory, a British officer removed the phone from the Fuhrerbunker, his son Ranulf Rayner, 82, tells CNN. "My father didn't see it as a relic of Hitler's glory days, more a battered remnant of his defeat, a sort of war trophy." The auction house explains that as the Russians gave Rayner's father, Ralph, a tour of the bunker, they offered him the black phone used by Hitler's wife, Eva Braun.

He responded that his favorite color was red, and so they handed him Hitler's phone instead. His other souvenir: a porcelain Alsatian "almost certainly personally presented to Hitler by Heinrich Himmler," per the auction house, which says the elder Rayner saw it on Hitler's desk.

The dog statue, made at the Dachau concentration camp, could fetch $35,000. "It's a pretty nasty thing, just as sinister as the phone," Ranulf Rayner tells CNN.

It's not the only Hitler auction to grab recent headlines: Amid protests by Jewish groups, an Argentine bidder spent more than $650,000 on Hitler's jacket and other memorabilia at a 2016 auction in Munich, per AFP.

This article originally appeared on Newser: One of History's Deadliest Phones Will Be Sold