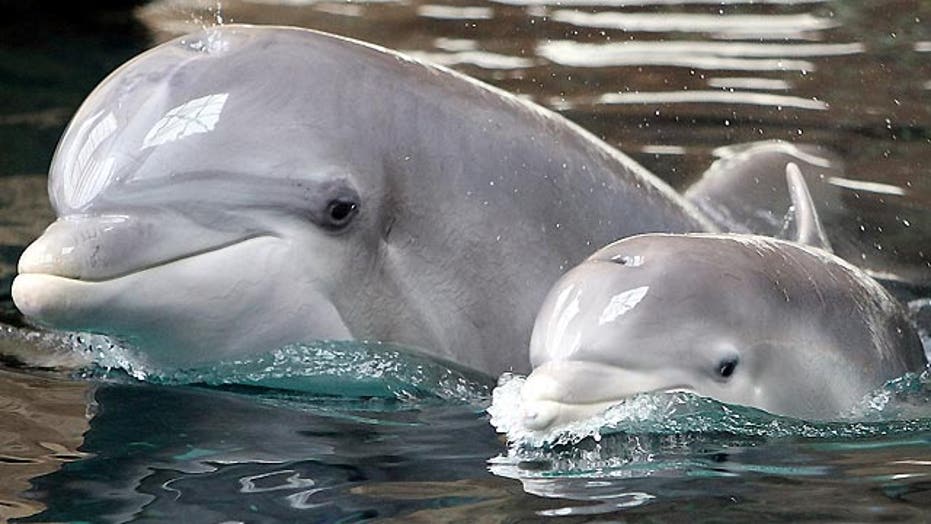 Study: Dolphins use whistles to call each other by name

A look at findings of new study

Dolphins call to each other using distinctive whistles that serve as names, new research suggests.

Each dolphin makes its own unique whistle, and close friends or family will reply with the same sound. The findings, published July 22 in the journal Proceedings of the National Academy of Sciences, suggest the dolphins use the whistles like names. Past research showed individual dolphins had personal whistles, but it wasn't clear that other members of their group learned that whistle.

"These are learned individual calls animals can sometimes copy to label or address one another," said study co-author Stephanie King, a marine mammal scientist at the University of St. Andrews in the United Kingdom.

Signature whistles
Dolphins use an amazing repertoire of buzzes, whistles and clicks to communicate with each other and hunt for prey. Past studies revealed that dolphins had signature whistles, and they used those whistles as personal calling cards to invite other dolphins to play.

But it wasn't clear that these sounds truly functioned as names that others could use to call to them. To see whether that was the case, King and her colleague Vincent Janik, also of the University of St. Andrews, used underwater recorders to track the signature whistles of bottlenose dolphins in St. Andrews Bay off the coast of Scotland.

The team then played those unique whistles back to the owner of that whistle as well as to other dolphins. Dolphins repeatedly called back when they heard their own "name," as if to reply to a friend's call. Stranger dolphins didn't reply, but friends in the same group possibly mother and calf or males with strong alliances occasionally called back using the same exact whistle.

Dolphins probably call back in response because "there's a strong motivation to reunite with those individuals," King said.

The findings suggest that dolphin signature whistles act somewhat like names, and that other dolphins can learn them. Scientists knew dolphins could learn specific vocalizations in captivity, but this is the first time they've shown this ability in wild dolphins.

Whereas human babies are given a moniker at birth, dolphin infants may essentially grow into their names; they likely begin making a unique whistle, and over time, that whistle becomes their "name," King said.

As a follow-up, the researchers want to see whether dolphins can learn other sounds in similar ways.