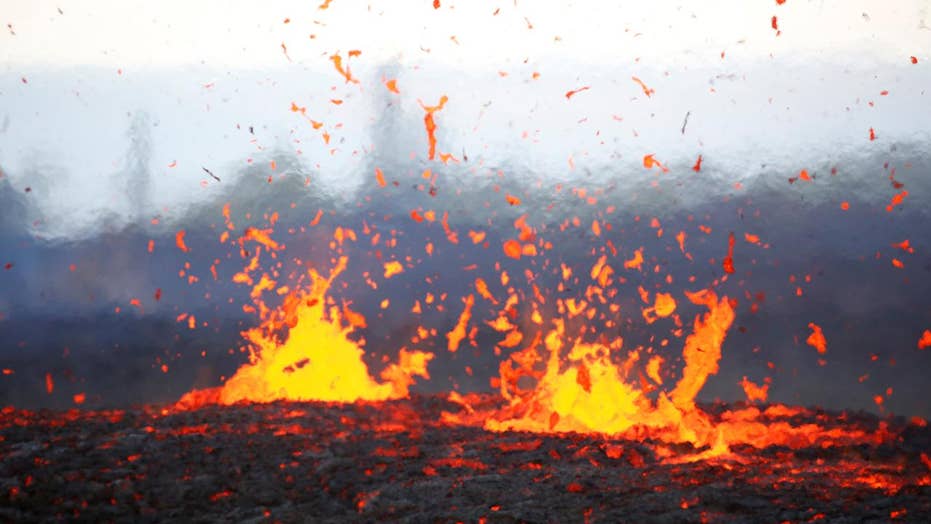 Dangerous levels of toxic gases found near the fissures of the volcano. Jeff Paul reports from Hawaii.

Hawaii's Kilauea volcano has slowly been swallowing up homes, cars and other structures throughout the Leilani Estates and Lanipuna Gardens neighborhoods with its 2,000-degree lava since it erupted on May 3.

The volcano's destruction has shocked the local community — and the nation as a whole — as it continues to spill fire and steam and threatens to explode, triggering a "red" warning on May 15.

But there are more volcanoes in the U.S. than many might realize.

IS HAWAII'S KILAUEA VOLCANO GOING TO EXPLODE? WHAT MOUNT ST. HELENS AND OTHER ERUPTIONS HAVE TAUGHT US

In fact, there are a total of 169 that are possibly active within the country, The New York Times reports, citing the U.S. Geological Survey. And out of those, about 50 are ranked "high priority" or "highest priority" to watch across six states, the newspaper adds.

Outside of Hawaii, America's most dangerous volcanoes are all part of what's known as the "Ring of Fire," a row of 450 volcanoes spread across several continents that sit on tectonic plates.

"All our mountains are considered active and, geologically speaking, things seem to happen in the Northwest about every 100 years," John Ufford, preparedness manager for the Washington Emergency Management Division, told The Associated Press. "It's an inexact timeline."

As all eyes are on Hawaii, here's a look at Kilauea and 9 other volcanoes that are considered the "most dangerous" according to the USGS, by way of the Associated Press.

Kilauea is one of the most active volcanoes in the country — with 34 eruptions in the past 66 years — but the Big Island hasn't seen an explosive eruption since 1924, when eruption spewed ash 20,000 feet above sea level and 10-ton rocks into the sky, leaving one man dead. The "steam-powered eruption caused more than 50 explosions over two and a half weeks," according to National Geographic.

Scientists are starting to see similarities between Kilauea's present day behavior and that of the 1924 event.

HAWAII KILAUEA VOLCANO'S ACTIVE HISTORY, AND THE SCIENCE BEHIND THE MOST RECENT ERUPTION

Mount St. Helens is a stratovolcano known for its deadly eruption in (THE ASSOCIATED PRESS)

Mount St. Helens is a stratovolcano, "a term for steep-sided, often symmetrical cones constructed of alternating layers of lava flows, ash, and other volcanic debris," the USGS explained in a post online.

The tall, snow-capped volcano is more likely to have explosive eruptions because of its shape.

"Composite volcanoes tend to erupt explosively and pose considerable danger to nearby life and property," the USGS says, adding that Hawaii's volcanoes are known for their long-flowing lava and active fissures.

At the time, the volcano experienced a series of small earthquakes followed by a magnitude 5.1 quake. The large quake, however, caused a giant landslide — "the largest debris avalanche on Earth in recorded history," according to the USGS. The landslide destroyed the volcano's northern flank (side) and cryptodome (a bulge of magma inside the volcano).

"The cryptodome was a very hot and highly pressurized body of magma. Its removal resulted in immediate depressurization of the volcano's magmatic system and triggered powerful eruptions that blasted laterally through the sliding debris and removed the upper 300 m (nearly 1,000 ft) of the cone," the USGS explained.

At 14,410 feet, Mount Rainier has the highest peak in the Cascade mountain range in the western U.S. Like Mount St. Helens, Rainier is also a stratovolcano with a "very high" threat potential. However, it has been awhile since it has displayed any activity.

"The last magmatic eruption was about 1,000 years ago," the USGS states on its website. "Extensive hydrothermal alteration of the upper portion of the volcano has contributed to its structural weakness promoting collapse."

Mount Rainier is located about from Portland. (iStock)

Located about 20 miles from Portland, Mount Hood is inside a national park. It has the highest peak in the state and helps contribute to the area's agricultural landscape.

The last time the volcano erupted was in 1865 AD.

"The volcano has erupted episodically for about 500,000 years and hosted two major eruptive periods during the past 1,500 years," the USGS explained.

Mount Shasta is the second largest volcano in the Cascade Range. (REUTERS)

Mount Shasta is the second largest volcano — at 14,179 feet — in the Cascade Range, behind Mount Rainier, Volcano Discovery reports.

Mount Shasta hasn't exploded in decades, but past acvitivty suggests it blows about every 700 years or so. The next time it erupts, there could be danger, USGS suggests.

"It has been suggested that because it is a long-lived volcanic center and has erupted only relatively small volumes of magma for several thousand years, Mount Shasta is the most likely Cascade Range volcano to produce an explosive eruption of very large volume," the USGS explained in a post online.

South sister is one of three "sisters" in the Cascade Range. (U.S. Geological Survey)

South sister is one of three "sisters" in the Cascade Range. There's also a Middle and a North sister, which all formed at different times. Out of these volcanoes, the South Sister is the youngest, highest  and the most dangerous of the group.

"A summit crater was formed by a late Pleistocene eruption. The main cone is made of andesite, dacite, and rhyodacite. The most recent eruption was about 1,900 years ago," Oregon State University explained in a blog post.

The volcano hasn't erupted in roughly 2,000 years, but there has been some recent activity. In March 2004, several earthquakes were recorded in the northeast "quadrant of the area of on-going uplift" and lasted for about 48 hours, the Smithsonian Institution's Global Volcanism Program wrote in an activity report at the time.

The Lassen Volcanic Center is located about 55 miles from Redding. The volcano is an active one, with more than 50 non-explosive eruptions over the past 100,000 years, the USGS reports. But the volcano has been pretty calm in recent years.

The volcano last erupted with "sporadic steam blasts" in 1917.

"Lassen Volcanic Center hosts a vigorous geothermal system, numerous hot springs, steam vents, and boiling mud pots," the USGS says. "Volcanic earthquakes are common, although most are too small to be felt."

Since the volcano is prone to earthquakes, that makes it a "very high" threat in the eyes of the USGS.

Mauna Loa is the largest volcano on the planet. (U.S. Geological Survey)

Mauna Loa is the largest volcano on the planet — and it's also pretty active. The Hawaiin volcano has erupted at least 33 times in the past 175 years.

Redoubt is a steep-sided volcano and one of the deadliest in Alaska. (AP/Alaska Volcano Observatory/USGS)

"The most recent eruption in 1984 lasted 22 days and produced lava flows which reached to within about 7.2 km (4.5 miles) of Hilo, the largest population center on the Island of Hawaii," the USGS reports. "Lava flows less than 4,000 years old cover about 90 percent of the volcano."

Redoubt is a steep-sided volcano and one of the deadliest in Alaska.

"The volcano is composed of intercalated pyroclastic deposits and lava flows and rests on Mesozoic granitic rocks of the Alaska-Aleutian Range batholith," the Alaska Volcano Observatory describes in a post online.

The collapse of Mount Mazama (one of the largest eruptions ever) created Crater Lake thousands of years ago. (National Park Service)

Its most recent activity was in June 2015 when scientists observed a flood from a "subglacial meltwater reservoir" in the volcano's crater that appeared to be from melted snow from an avalanche, according to a report posted online at the time.

The collapse of Mount Mazama (one of the largest eruptions ever) created Crater Lake thousands of years ago. Thus, Crater Lake is known as a caldera — a large volcanic crater formed by an explosive eruption.

"Volcano hazards at Crater Lake fall into two main categories: 1) eruptions within the caldera, reflecting reawakening of the Mazama system, where Crater Lake itself will play an important role in determining the hazardous potential, and 2) eruptions from new vents on the flanks or in the surrounding region," the USGS explains.

The likelihood that magma and water will interact increases the chance of an eruption. Any eruption in shallow water would be especially violent, the USGS points out.