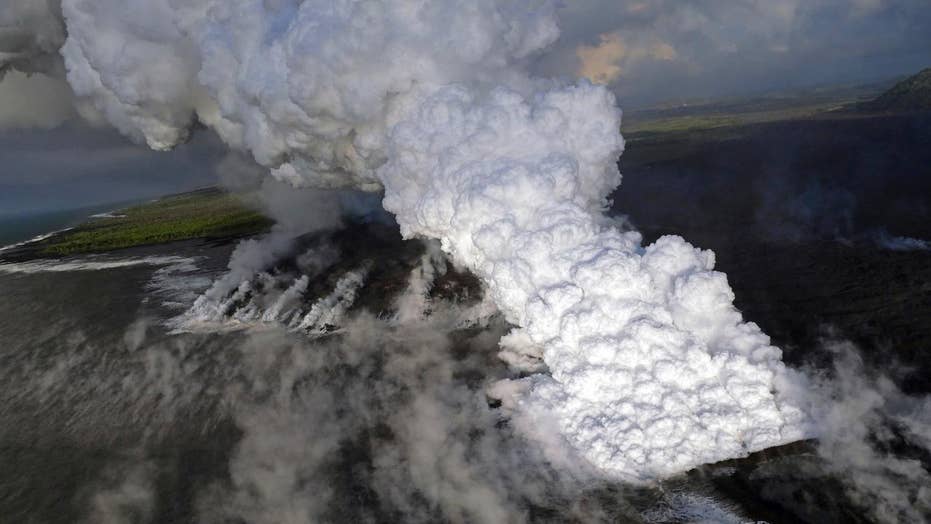 Scientists with the U.S. Geological Survey say they don't know when the volcanic activity will stop.

The number of homes and structures destroyed by lava on Hawaii’s Big Island has jumped to nearly 600 -- making the Kilauea eruption the most catastrophic event in modern state history, Hawaii County Mayor Harry Kim said Thursday.

Kim, who lost his own home to the devastating magma march that began in May, has been pushing for more funding to help thousands of displaced residents.

That help came Thursday after Hawaii Gov. David Ige signed a memorandum of understanding that freed up $12 million in immediate disaster relief to the island. The money covers overtime pay for police, fire, public works and civil defense personnel. It also provides funds for equipment needed for evacuations and rebuilding.

“This is an ongoing emergency and we’re in the early stages of damage assessment, but we do know that costs for overtime, equipment and materials are mounting,” Ige said. “This funding will help the county continue to protect the health, safety and welfare of area residents.”

“This is an ongoing emergency and we’re in the early stages of damage assessment, but we do know that costs for overtime, equipment and materials are mounting.”

Kim, who had previously said it would take a minimum of $5 million per mile to repair roads ravaged by Kilauea, said the $12 million will help Hawaii County “focus on the critical tasks of making life better for our people affected by the eruption.”

Ige and Kim also announced the formation of a federal, state and local task force that would develop a recovery plan for the hardest-hit communities.

“Our responsibility is to try to work with the community to rebuild out of harm’s way,” Kim said.

Thousands of residents have been left shell-shocked by the devastation that’s been pounding the island. Most recently, a huge river of lava has engulfed two entire seaside subdivisions – Vacationland and Kapoho Beach Lots. That’s on top of the losses at Leilani Estates, one of the first areas to feel the destructive power of Kilauea.

“So if you combine the three of them, we’re talking about 600 homes,” Kim said, adding that the number doesn’t account for the farmers, ranchers and their employees forced off their land and out of work.

Scientists with the U.S. Geological Survey say they don’t know when the volcanic activity will stop.

Late Thursday, the Hawaiian Volcano Observatory reported that fissure 8 “is very active and producing a large channelized flow that has filled in Kapoho Bay.”

HVO said the lava delta is 1.2 miles wide and added that “ocean entry is sending a large laze plume into the air along the coastline.”

As of early Friday 24 separate fissures covered nearly 8 square miles of land in lava. The fountain of lava at fissure 8 has reached as high as 250 feet in the air.

If that wasn’t enough, residents have had to deal with more than 9,000 earthquakes that have rattled the Big Island since May 3. The largest, a magnitude 6.9, produced an ash plume that was 30,000 feet high.

Four lava flows have reached the blue waters of the Pacific Ocean.