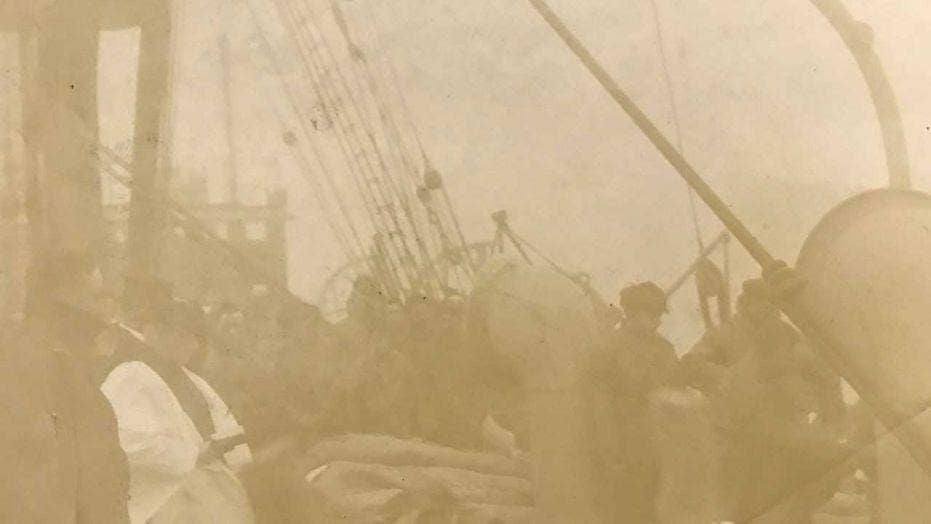 After the Titanic sank, ships were sent to help with the recovery. A rare photo of a burial at sea has resurfaced as part of a collection that is soon to hit the auction block.

A rare photograph of a burial ceremony for a victim of the Titanic disaster is going up for auction this weekend, 106 years after the ill-fated ocean liner sank in the Atlantic, with more than 1,500 of its 2,224 passengers perishing.

The photo belongs to R.D. "Westy" Legate, the 4th officer of the C.S. Mackay-Bennett, a cable laying ship that helped recover 300 bodies of those lost on the Titanic, including the ship's band-leader, Wallace Hartley.

Auctioneer Andrew Aldridge, from auction house Henry Aldridge & Son, said material from this part of the ship's history is "extremely scarce" and the fact that it comes from an officer onboard during the recovery mission, makes it "exceptionally important."

In the photo, Rev. Hind is shown conducting a burial service and consigning a body into the ocean. What is fascinating, Aldridge noted, is that the canvas bag for body number 177 is clearly shown, even though Hind only presided over 166 bodies buried at sea aboard the Mackay-Bennett. Hind performed the same prayer for each body, Aldridge added.

"Despite the number of bodies buried at sea, visual records of the burial and service, such as this photograph, are almost non-existent, even in period publications," Aldridge added in the email to Fox News. "Reverend Hind found it curious that White Star would have chartered the Mackay-Bennett to recover the bodies while not sending a company agent to accompany the vessel. This was the case for all the vessels chartered by the company for this purpose."

The photo is part of a period album along with other images from Legate, including two of him in uniform, as well as two albums full of photographs.

The lot is just one of several that are set to go up for auction, nearly 106 years to the day that the Titanic suffered its fate.

An extraordinarily rare copy of a lunch menu from the first meal served onboard the ship is listed. Additionally, a rare love letterfrom one of the survivor's of the wreck, Kate Buss, is also being listed by Henry Aldridge & Son.

The Titanic sank in the Atlantic Ocean in the early hours of April 15, 1912, just five days after its maiden voyage started. There were 2,224 people onboard the ship, 1,503 of whom perished, making it one of the most deadly shipwrecks in modern history.