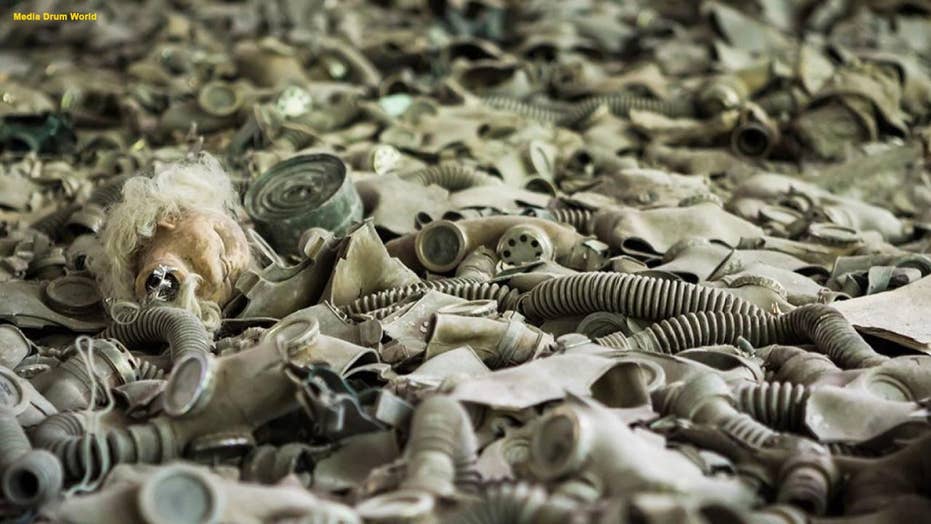 New photographs show how nature is reclaiming a town abandoned after a nuclear disaster 33 years ago. A two-year project examining the eerie remains of Chernobyl and Pripyat in Ukraine show gas masks scattered about and dolls left abandoned in a daycare center.

Eerie photographs taken recently show how nature is reclaiming an abandoned town 33 years after the nuclear disaster at Chernobyl.

The harrowing pictures show what is left of the towns of Chernobyl and Pripyat in Ukraine with gas masks scattered about and dolls left abandoned in a daycare center.

Other captivating photos show an abandoned supermarket with a shopping trolley outside and a rusting bumper car.

Dutch photographer Erwin Zwaan, 47, traveled to the 18-mile exclusion zone around Chernobyl in Northern Ukraine in 2016 and 2018 to photograph the ghostly ruins.

The power plant and nearby town Pripyat - once home to 50,000 people - remain more or less untouched three decades after they were evacuated in 1986.

“Chernobyl is unlike any other place,” Zwaan explained.

“It’s surreal, impressive, sad, but also beautiful. You’re roaming around in an area where chapters ended and at the same time new chapters started.

"Nature took over and is doing very well. I don’t think there is any other place that has so many sides to just as many stories.”

Chernobyl was the scene of the worlds’ worst nuclear disaster when the No.4 reactor overheated during a bungled safety test on the night of 25–26 April 1986.

The explosion and fire that raged for nine days sent radioactive particles into the atmosphere which spread across Europe.

At least 31 people died - including two at the scene and dozens more who succumbed to radiation sickness in the following weeks - but the number of deaths including from cancer could eventually hit 4,000.

For Zwaan, who focused more on his photography after almost losing his sight when he was 32, it is important to remember the repercussions of the horrendous nuclear catastrophe.

“The message I try to convey in this book is to raise awareness to this disaster that still goes on today,” added Zwaan, who used his Canon EOS 5D Mark 3 and Mark 4 for the shots.

Nowadays, more than 10,000 tourists explore the disaster site every year.