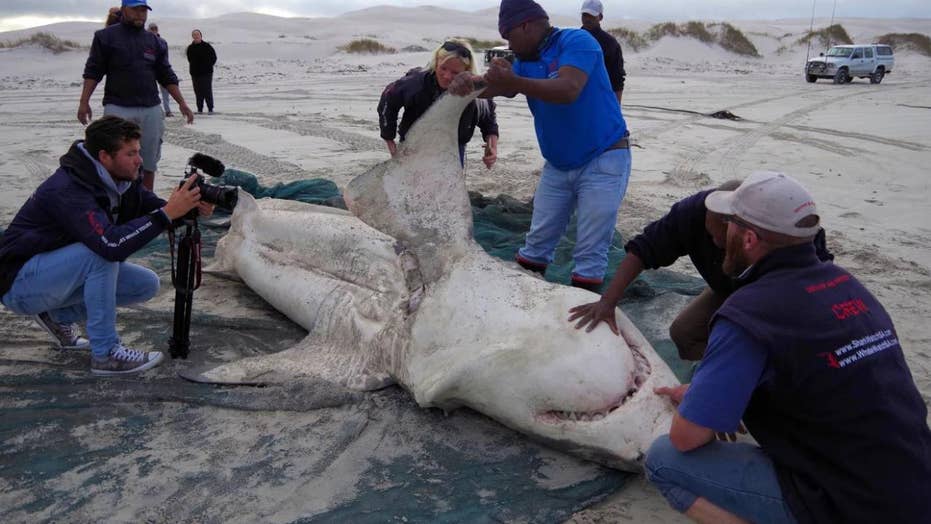 Off the coast of South Africa, just below the ocean’s surface, an epic battle is underway as killer whales hunt and kill the world’s most iconic predator, the great white shark.

The phenomenon began in early May, when scientists at the shark cage diving company Marine Dynamics spotted a pair of killer whales cruising along the southwestern coast of South Africa. Days later, great white shark carcasses began washing up in their wake.

The five great white sharks that washed up on the beach ranged from 9 to 16 feet and all had a large tear below one of their pectoral fins. Most notably, all the sharks were missing their entire livers, which were removed with almost surgical precision. According to the scientists performing the autopsies, these injuries are a clear sign of orca predation.

A great white shark being removed from a beach in South Africa. (Marine Dynamics)

“I've seen some incredible things working with the Dyer Island Conservation Trust, but one thing I never ever expected to see was predation pressure from killer whales,” Towner said. “We had never even seen an orca here prior to 2011.”

So, how exactly does an orca hunt a great white?

One theory is that the orca shuts down all communication, sneaks up and stuns the shark by slapping it with its massive, powerful, tail. Then it flips the shark on its back, causing momentary paralysis, and pushes the shark through the water until it suffocates. The orca finishes its attack by carefully tearing open a hole in the shark to remove the liver, the largest and most nutrient-rich organ.

Orcas have been attacking great white sharks off the coast of South Africa. (Marine Dynamics)

While only a handful of great white sharks washed up on the beaches, experts believe it is highly possible that more sharks were killed but the carcasses sank to the sea floor. The sharks that did wash up were likely attacked close to shore, with currents, tides and onshore winds helping push their carcasses up onto the beach.

“I was walking with my dogs along the beach and I saw something lying on the sand,” said Anton Barnard, a local fisherman and ex-naval officer. “When I came closer I saw that it was a great white shark. It’s the first time in [my] 20 odd years [here] that I've seen anything like this.”

Orcas are very specialized predators. They typically eat seals, some whales and some sharks, but rarely great whites.  Towner suspects this pair began hunting smaller sharks and have now graduated to the apex predator of the sea. “Now they have learned how to kill white sharks, that’s probably not going to stop anytime soon.”

So how do these predators stack up against each other? Both great whites and orcas are considered apex predators, in that there is no marine animal that typically preys on them. Both species are capable of swimming 30 mph but orcas are slightly longer in body length and almost twice as heavy. Orca attacks on great whites have been recorded only twice before, off the coast of California and Australia. There have been no recorded cases of great whites hunting Orcas. The killer whale’s great advantage? Unlike great whites, Orcas hunt in teams and learn like no other marine creature.

After a three week period where the great whites had disappeared from the area entirely, Marine Dynamics has seen the whites slowly returning to their boats in Gansbaai.

Considered a threatened species, an estimated 4,000 to 5,000 great whites are left in the entire world. Scientists worry about the long term effect of this never-before-documented predation.

'HE WAS SCREAMING': MAN BADLY BITTEN BY SHARK WHILE SPEARFISHING OFF CALIFORNIA BEACH

“Sharks face many threats in Southern Africa” Towner explained. “Fisheries, bather protection nets, poaching, pollutants, coastal development, global warming impacts. Now they have predation pressure from another predator, the odds are just not stacked up in their favor.”  With minimal funding and resources allocated toward white shark research in South Africa, the mysteries of this predation and the future of great white sharks remain uncertain.