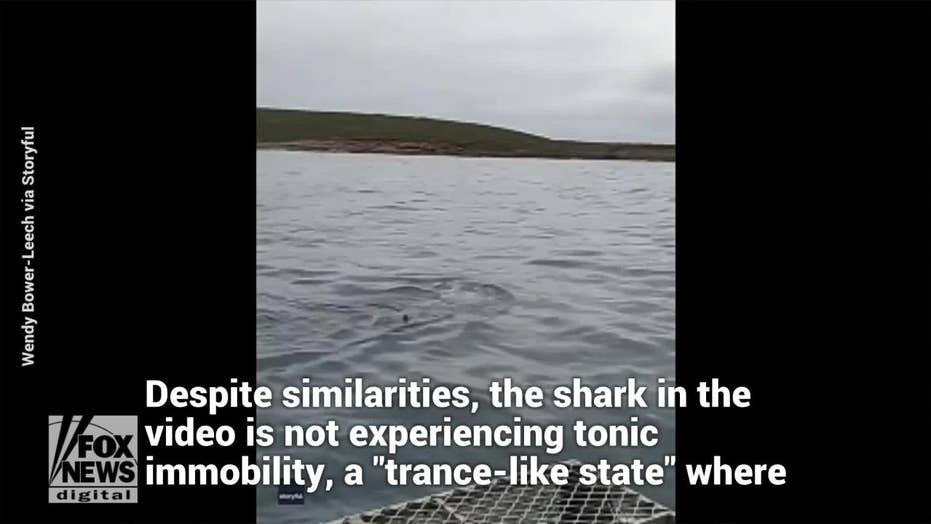 SEE IT: A great white shark caught swimming on its back in a rare event

SEE IT: A great white shark shocks diving tourists in South Australia by swimming on its back.

You don't see this every day. Or maybe ever.

A giant great white shark gave shark-diving tourists a rare treat when it was spotted swimming upside down off the coast of South Australia.

Diving company Calypso Star Charters posted the video to its Facebook page, noting this was the first time this type of incident had ever been seen in the area.

"We do not see them do this very often at all. In fact, it was the first time Capt. Dave had seen it himself!" the company wrote in the Oct. 3 post.

A Calypso Star Charters spokesman told Fox News they were not sure what caused the shark to swim on its back like that.

"It swam on its back for several seconds as depicted in the video but the shark was in the vicinity of our dive cage for a couple of hours much to the delight of our guests," the spokesman said in a Facebook interview. The spokesman added that the female shark was not tagged and it was approximately 12 feet long, or 3.5 meters.

The footage was taken by one of the tour's customers, Wendy Bower-Leech.

Despite similarities, the shark in the video is not experiencing tonic immobility, a "trance-like state" where the shark is turned on its back and disoriented, akin to human hypnosis, according to Shark Trust.

The incredible video comes just days after another great white, a 17-foot behemoth named Bullet, was captured on film biting and shaking a shark-diving cage off the coast of Mexico.

This story has been updated to include comments from a Calypso Star Charters spokesman.