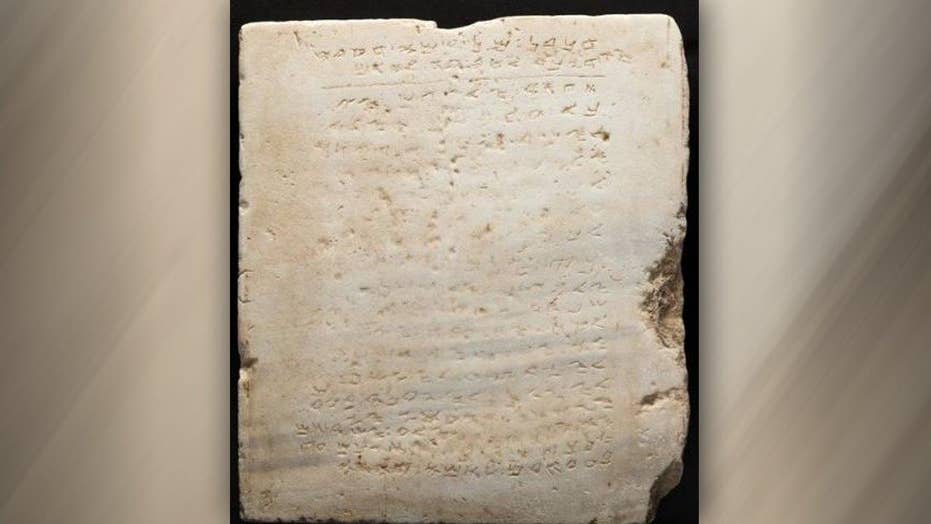 The two-foot square, 115-pound slab inscribed with early Hebrew script was first uncovered during an excavation in Israel in 1913

The earliest known stone inscription of the 10 Commandments is available to the highest bidder on Nov. 16, but don’t dust off your mantel at home just yet: this relic has to be shown off in public.

The stone is presented by Heritage Auctions in the properties of the Living Torah Museum Auction, and will be auctioned in Beverly Hills, California. It is believed to have been carved sometime between 300 and 500 CE, and is assumed to be from a synagogue that was either destroyed by Romans between 400 and 600 CE or by 11th-century crusaders.

It is described as a square, white marble slab, weighing roughly 115 lbs. and inscribed with 20 lines of text. Each line contains between 11 and 15 characters of Paleo-Hebrew, or Samaritan, dialect.

Nine of the 10 commonly-known Commandments from the book of Exodus adorn the stone, but it swaps “Thou shalt not take the name of the Lord thy God in vain,” for a Samaritan commandment that worshippers “raise up a temple” on Mount Gerizim, which served as the holy mountain for the Samaritans.

Although Dead Sea Scrolls dating to the 1st century BC containing the Commandments on papyrus and parchment paper have surfaced in the past, there are only four known examples of stone inscriptions, according to Art Daily.

The stone first surfaced in 1913, as excavations were made for a railroad station near Yavneh, Israel. It then served as flooring for a private owner’s courtyard, where, over time, foot traffic wore out portions of the tablet’s writing. In 1943, a man named Y. Kaplan acquired the stone and had it studied. It was then purchased in the 1990s by Robert Deutsch, an antiquities dealer.

The stone is considered a “National Treasure” of Israel, but in 2005, the Israeli Antiquities Authority (IAA) approved its export to the U.S. and the care of Rabbi Saul Deutsch of the Living Torah Museum on the condition that it be displayed in a public museum, according to Heritage Auctions.

"There is nothing more fundamental to our shared heritage than the 10 Commandments," said David Michaels, Director of Antiquities for Heritage Auctions, in a statement, "and Heritage Auctions is honored and privileged to be entrusted with the sale of this remarkable piece of Biblical history."

Interested bidders will also have to comply with the artifact’s “National Treasure” status by proving it will be displayed for the public once purchased, according to Heritage Auctions.