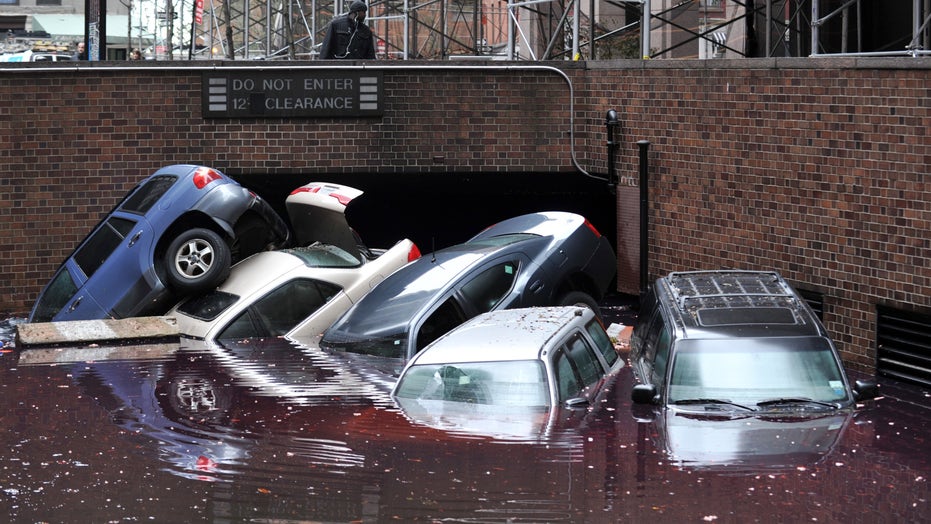 If New York built a massive, multibillion dollar sea wall in the ocean, could it safeguard 8.6 million people from storm surges similar to Hurricane Sandy in 2012?

A 6-mile-long wall is one of the options being studied by the Army Corps of Engineers as the goverment rethinks how to protect New York City's vulnerable and valuable coastline from destructive storms.

According to the Corps report, a gigantic wall built out in the outer New York Harbor would cost $119 billion and take 25 years to construct. Experts have mixed opinions about the feasibility and overall effectiveness of such a barrier.

Catherine McVay Hughes, who led the community board in lower Manhattan during Hurricane Sandy, supports the idea building out in the harbor as opposed to near to coastline, telling The New York Times: "Do we want a 20- or 30-foot wall between Battery Park and the river?"

Cars piled on top of each other at the entrance to a garage on South Willliam Street in Lower Manhattan October 31, 2012 in New York as the city begins to clean up after Hurricane Sandy. AFP PHOTO/Stan HONDA (Photo credit should read STAN HONDA/AFP via Getty Images) (Getty Images)

Still, other advocates and experts believe it's possible the barrier could be obsolete by the time it is finished -- due to changing estimates of future sea level rise.

“These sea gates will not be able to protect communities from flooding caused by rising tides and rising sea levels, and once they’re built, that’s it,” Scott M. Stringer, the New York City comptroller, who in a recent letter to the Corps urged them to reshape the plans, told the Times. “We’re not going to get the money again.”

On Saturday, President Trump weighed in against the idea of building a sea wall.

New York Mayor Bill de Blasio responded to Trump, writing: "We lost 44 of our neighbors in Hurricane Sandy. You should know, you lived here at the time. Your climate denial isn't just dangerous to those you've sworn to protect -- it's deadly."

Hurricane Sandy was the second-costliest storm on record in the United States, inflicting nearly $70 billion in damage and killing at least 233 people in eight countries. In New York, thousands of homes and an estimated 250,000 vehicles were destroyed, and all of the road tunnels into Manhattan were flooded.