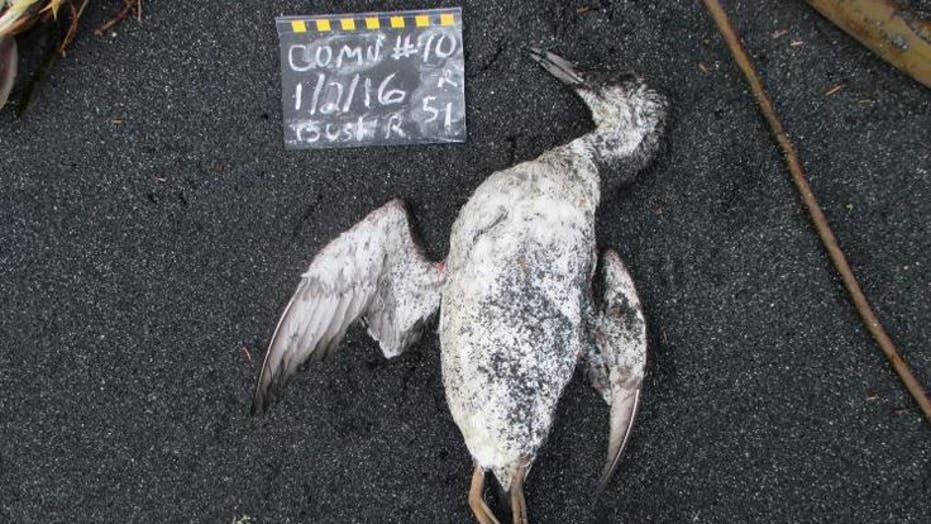 A huge and long-lasting marine heat wave that became known as "the blob" was responsible for the death of nearly one million seabirds in the Pacific Ocean in 2015 and 2016, a new study reveals.

The massive death of common murres, their carcasses washing ashore by the thousands along the California coast and near Alaska, was considered unprecedented by experts.

Scientists from the U.S. Geological Survey and the University of Washington now blame a squeeze on the birds' food supply that was brought on by "the blob."

Common murres are forage fish, able to dive below the water's surface in order to feed on herring, cod, haddock, marine worms and squid, among others, according to Audobon.

A dead common murre found by a citizen scientist on a routine monthly survey in January 2016. (COASST)

“Think of it as a run on the grocery stores at the same time that the delivery trucks to the stores stopped coming so often,” explained second author Julia Parrish, a UW professor in the School of Aquatic and Fishery Sciences, in a story on college's website. “We believe that the smoking gun for common murres – beyond the marine heat wave itself – was an ecosystem squeeze: fewer forage fish and smaller prey in general, at the same time that competition from big fish predators like walleye, pollock and Pacific cod greatly increased.”

Warmer surface water temperatures in the Pacific Ocean near the coast started to occur in the fall and winter of 2013, but continued through the following two years, according to scientists.

About 62,000 dead or dying common murres washed ashore between summer 2015 and spring 2016, according to the study, which was published Jan. 15 in PLUS ONE.

However, scientists write in the study's abstract that typically only a fraction of dead birds wash ashore, so they estimate that total mortality approached one million birds.

Common murres washing onto beaches in the Homer, Alaska, area were so abundant in early 2016 that COASST beach surveyors were forced to collect and photograph them in batches.

“The magnitude and scale of this failure has no precedent,” lead author John Piatt, a research biologist at the U.S. Geological Survey’s Alaska Science Center and an affiliate professor in the UW School of Aquatic and Fishery Sciences, told the university's news site.

“It was astonishing and alarming, and a red-flag warning about the tremendous impact sustained ocean warming can have on the marine ecosystem,” he said.