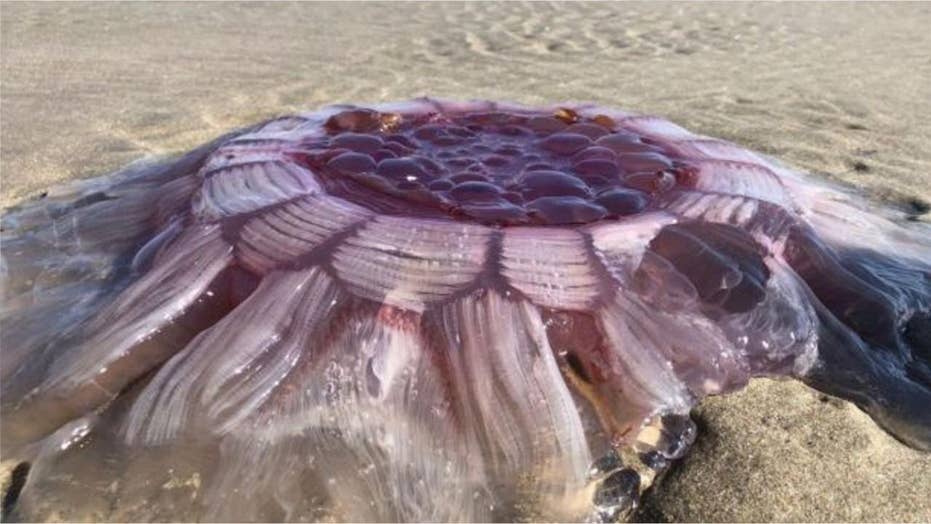 A giant contracting creature was discovered by a family on a beach in New Zealand.

Adam Dickinson told his children to steer clear of a massive jelly-like blob they stumbled upon on a New Zealand beach early Monday. The family surrounded the creature, which appeared to be moving.

It was unlike anything Dickinson had ever seen before.

"My initial thought was don't let my kids touch it as they went running up to have a look," Dickinson, who lives in Stanmore Bay, recalled to Fox News.

The large creature washed up on Pakiri Beach, roughly 55 miles north of Auckland.

MYSTERIOUS FUR-COVERED SEA 'MONSTER' WASHES UP ON BEACH: 'COULD IT BE SOME ANCIENT CREATURE?'

Dickinson's children compared the pink creature to a "volcano."

A New Zealand family stumbled upon a giant jellyfish while on a beach about 55 miles north of Auckland. (Adam Dickinson)

“It was pretty incredible and really hard to describe,” Dickinson told Yahoo7. “It almost looked like a load of muscles contracting."

It was clear the creature, which Dickinson later discovered was a lion's mane jellyfish — the largest species of jellyfish in the world — wasn't dead.

The family stared at the jellyfish, and sure enough, it continued to move.

“It was pretty amazing to see. Also, the other jellyfish we found on the beach, we turned them upside down to see if it would look similar to this one and none of them did," Dickinson told the news station. “This one was definitely different. We have never seen anything like it. It was pretty cool.”

The New Zealand family soon discovered the creature was a lion's mane jellyfish, the largest species of jellyfish in existence. (Credit: Adam Dickinson)

A lion's mane jellyfish, also known as the "giant jellyfish," can grow as large as a blue whale. Its tentacles can reach 190 feet long and it can have a bell diameter of up to 7 feet, according to Oceana, an international conservation organization.

The majority of lion's mane jellyfish live in the Arctic and Pacific Ocean, where waters tend to be cooler.

"Its ‘mane’ of long, hair-like tentacles hanging from the underside of its bell-shaped body is the inspiration behind the lion mane’s common name," Oceana explains in a blog post. "The mouth is situated on the belly’s underside, surrounded by tentacles that are divided into eight clusters of up to 150 tentacles each."

This type of jellyfish typically feeds on plankton, small fish and other tiny organisms. The lion's mane jellyfish packs a powerful sting, typically using its toxic tentacles to paralyze its prey.