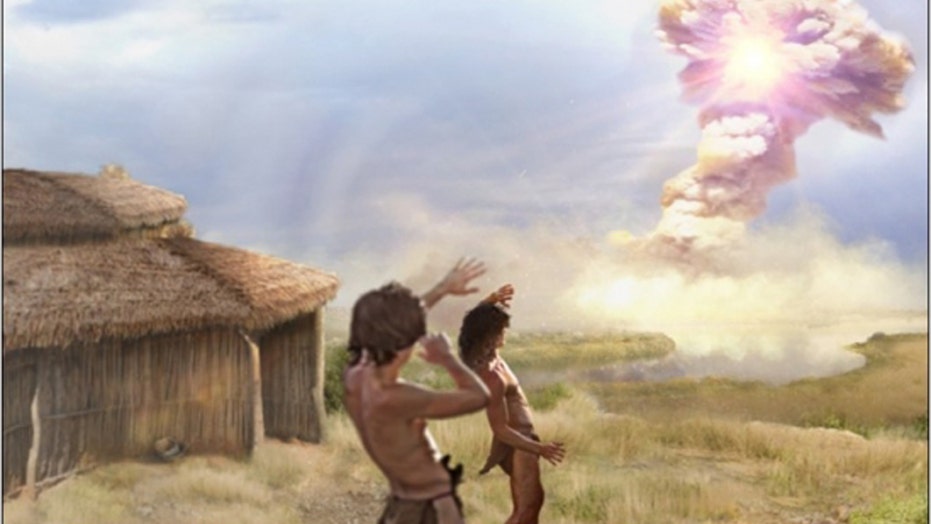 The asteroid that hit Earth nearly 13,000 years ago and ended the Pleistocene era likely wiped out an ancient civilization in what is modern-day Syria, according to newly discovered evidence.

The research, published in Scientific Reports, notes that experts discovered remnants of glass that were created during a high-impact event, as well as minerals such as chromium, iron, nickel and others, all of which formed in temperatures higher than 2,200 degrees Celsius, according to a statement from the University of California-Santa Barbara.

“To help with perspective, such high temperatures would completely melt an automobile in less than a minute,” said one of the study's co-authors and UC Santa Barbara emeritus professor of geology James Kennett in the statement.

The discovery was made at a site known as Abu Hureyra, which was abandoned roughly 5,000 years ago.

Known as the Pleistocene Epoch, the most recent ice age is generally defined as starting 2.6 million years ago and ending approximately 11,700 years ago

The glass is believed to have formed “from the nearly instantaneous melting and vaporization of regional biomass, soils and floodplain deposits, followed by instantaneous cooling," according to the study. Kennett added that the materials found are "extremely rare" under normal temperatures, but common during impact events.

A "single, major asteroid impact" could not have caused the widely scattered material discovered at Abu Hureyra and that it was more likely a fragmented comet, the researcher said.

“The largest cometary debris clusters are proposed to be capable of causing thousands of airbursts within a span of minutes across one entire hemisphere of Earth," Kennett explained. "The [Younger Dryas Boundary] hypothesis proposed this mechanism to account for the widely dispersed coeval materials across more than 14,000 kilometers [8,700 miles] of the Northern and Southern Hemispheres. Our Abu Hureyra discoveries strongly support a major impact event from such a fragmented comet.”

Previous studies have focused on the Younger Dryas event, a period that saw the extinction of species such as woolly mammoths, bison and giant sloths, causing global consequences.

In October 2019, a study was published that said a brief ice age period occurred roughly 12,800 years ago and was caused by an asteroid impact, after researchers found high levels of iridium and platinum in White Pond near Elgin, S.C.

An enormous crater, first discovered in 2015 but not officially verified until November 2018, left a 19-mile crater in Greenland and may have caused the disappearance of the Clovis people, a mysterious prehistoric group that vanished without a trace, according to The Sun.

According to NASA, the massive hole is "one of the 25 largest impact craters on Earth" and is said to have "rocked the Northern Hemisphere."