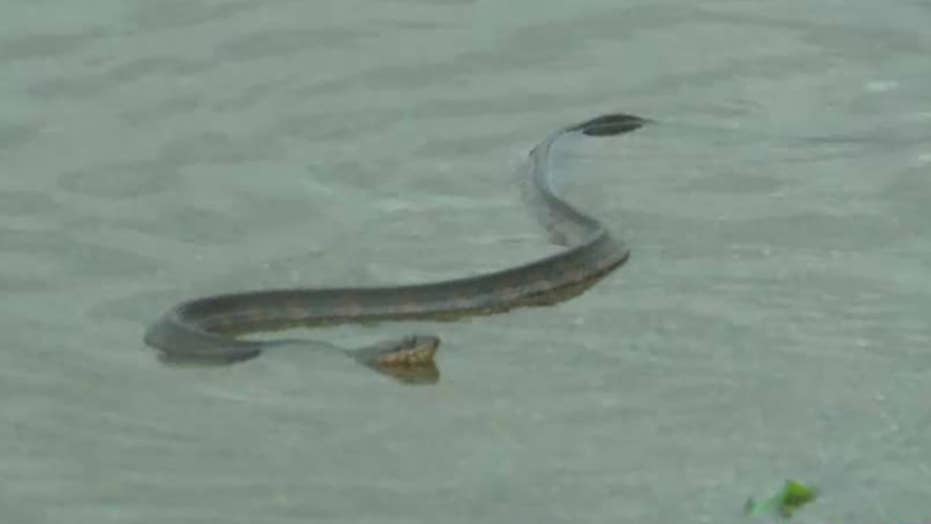 Griff Jenkins spots a snake in the flood waters while reporting on Florence.

Tropical Storm Florence made landfall Friday, bringing powerful storm surges and catastrophic flooding with it. But in addition to the destruction, the storm could also bring a wave of venomous snakes.

Thad Bowman, with the Alligator Adventure zoo in Myrtle Beach, South Carolina, told The Sun News that residents in the Carolinas should be on the lookout for venomous snakes such as cottonmouths and copperheads, which could be displaced from their habitats due the storm.

The displacement could cause the reptiles to wind up in the floodwaters, he said.

SNAKES ON A PLANE: PASSENGER FLEW FROM GERMANY TO RUSSIA WITH 20 SNAKES IN HIS BAG

Although copperheads bites are rarely fatal, they are a species of snake that is “the most likely to bite,” Live Science reported. Cottonmouths -- sometimes referred to as “water moccasins” -- have a potent venom that can be deadly, the publication also reported.

“They inject venom, which causes tissue destruction, platelet loss, causes bleeding, it can cause death,” Gerald O’Malley, director of toxicology at Grand Street Hospital in Myrtle Beach, told the newspaper of the snakes.

Bowman warned that locals should stay indoors during the storm if they haven’t been asked to evacuate. However, if bitten by a snake swept into the floodwaters, Bowman said to seek medical treatment as soon as possible.

While some area hospitals may be closed due to the storm, the Conway Medical Center is open, The Sun News reported.