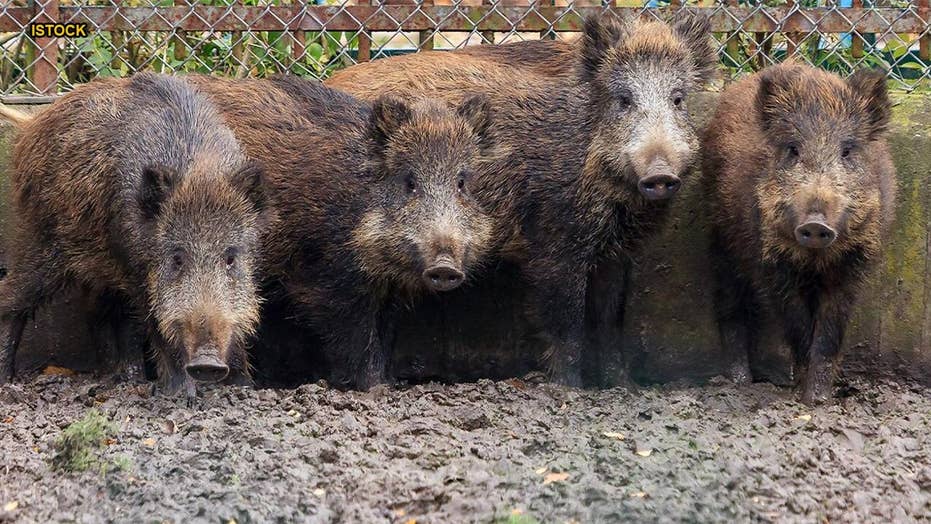 America's northern border has U.S. officials warning of widespread damage potentially posed by feral pigs spotted near the International Boundary between Canada and the United States. The pigs, described as ‘rototillers,’ root for food, wallow in farms, fields and forests, and can decimate terrain.

This hogtie was supersized.

A massive 411-pound feral hog marauding through a Texas golf course was captured and removed last week, according to trappers.

FERAL HOGS HEADED FOR US FROM CANADA; WILDLIFE OFFICIALS WARN OF WIDESPREAD DAMAGE

Wyatt Walton said he and his team from Lone Star Trapping wrangled the wild beast and tied it up alive at the Gateway Hills Golf Course in San Antonio on Thursday. Walton shared photos of the captured hog and another boar on Facebook.

But it wasn’t an easy animal to catch. The “extremely large” hog was “trap smart” and they needed several hunting dogs to assist in taking it down, Walton wrote.

“The work isn’t done,” Walton wrote. “As San Antonio continues to flourish in population, there’s that much more native land having developments built on it. To accommodate the growth, native wildlife is just being pushed and pushed. Eventually, you end up having instances with human interactions, as [the animals] are just trying to survive.”

There are an estimated 1.5 million feral hogs in the state, according to Texas Parks and Wildlife. The animals, which can reach a shoulder height of 36 inches and weigh between 100 and 400 pounds, are known to cause damage to livestock and farmland while rooting and trampling for food.

Some biologists estimate the costs are as high as $400 million each year, according to KLTV.

It became legal in Texas to hunt the animals without a license on Sept. 1, when SB317 when into effect.

The massive hog’s ultimate fate was unclear, though when other users asked what he’d do with the animal, Walton wrote he was going to “mount his overly large melon.”