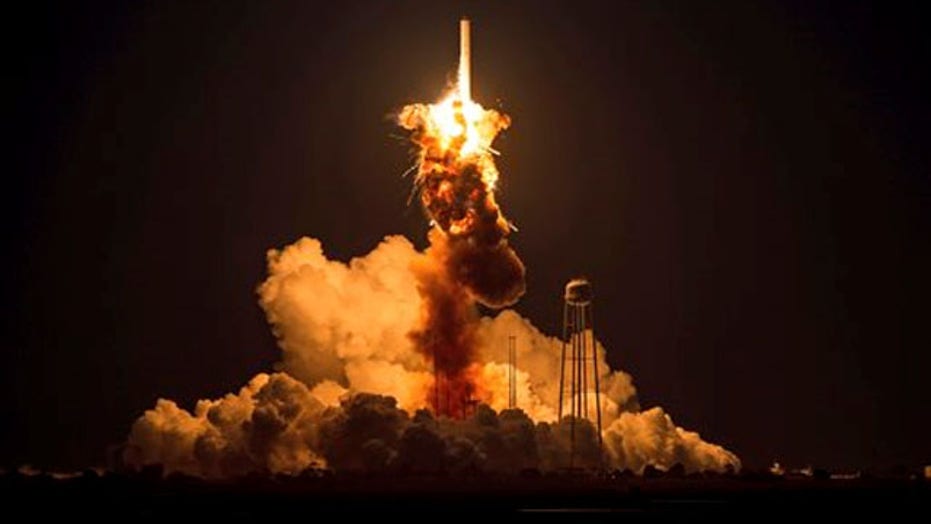 The explosion of an unmanned U.S. rocket to the International Space Station late Tuesday has shone a spotlight on America’s reliance on overseas space hardware, some of which dates back to Soviet era Russia.

Built by Dulles, Va.-based Orbital Sciences as part of a $1.9 billion contract with NASA, the Antares rocket exploded in a fireball just 6 seconds after liftoff from Wallops Island in Virginia.

It’s too early to say what caused the blast, according to Orbital Sciences and NASA. During a press conference late on Tuesday, however, Orbital Sciences executive vice president Frank Culbertson was quizzed about Orbital’s use of refurbished Russian engine hardware.

“We don’t know whether the engine was involved in this or not,” he said. “That’s something that we will try to determine as quickly as possible.”

Orbital uses AJ26 rocket engines from Aerojet Rocketdyne. The engines are a "commercial derivative" of the NK-33 engine that was initially developed to power the Russian N-1 rocket on a lunar mission in the early 1970s, according to Sacramento, Calif.-based Aerojet.

“Basically, this was an engine that was designed to carry cosmonauts to the moon – a number of them were bought by Aerojet several years ago to be refurbished and ‘Americanized’ and provided to American industry,” explained Culbertson. “It’s an extensively tested engine – it’s very robust and rugged.”

The Orbital Sciences executive added that no “anomalies” or other issues indicating a problem were identified during testing.

Culbertson also acknowledged the difficulties getting hold of rocket hardware, particularly in the U.S. “When you look at it, there are not very many other options around the world, in terms of using power plants of this size, and certainly not in this country, unfortunately,” he said.

Chris Carberry, executive director of Explore Mars, a non-profit organization which aims to advance the goal of sending humans to Mars within the next two decades, told FoxNews.com that the U.S. has to be careful not to become over-reliant on foreign technology to support its space program.

“The U.S. has been taking steps to become less reliant on Russian engines as a result of recent tensions with Russia,” he noted, in an email to FoxNews.com.

The U.S. Air Force, for example, is seeking out alternatives to Russian rocket engines for its satellite launches.

Set against this backdrop, Orbital Sciences’ rival SpaceX has been vocal about the fact that it builds its own rocket engines. SpaceX CEO Elon Musk even poked fun at Orbital Sciences’ engine technology during a 2012 interview.

Last month NASA awarded its highly-anticipated space taxi contract to Boeing and SpaceX, which aims to end the agency’s reliance on Russian technology to transport U.S. astronauts to the International Space Station.

Underlining the failure the Antares launch, however, Russia successfully launched its own unmanned supply ship to the International Space Station early on Wednesday.

John Logsdon, professor emeritus of political science and international affairs at George Washington University's Space Policy Institute, told FoxNews.com that both the Obama and the Bush administrations have not provided adequate funding for "a high-quality U.S. space effort."

Orbital Science's use of old Russian engines also reflects the global character of the space business, according to Logsdon.

"When Orbital Sciences decided to develop what turned out to be the Antares rocket almost ten years ago, it examined the supply of rocket engines from around the world and decided that the former NK-33 engines, which another U.S. company had already purchased from Russia, gave the best mix of cost and performance," he explained, in an email. "One can criticize that choice in retrospect, but it was a commercial decision, not symptomatic of anything except the U.S. not investing for many years in new propulsion capabilities."

Roger Franzen, technical manager of the Giant Magellan Telescope at the Australian National University’s Mount Stromlo Observatory just outside Canberra, said that the business of launching rockets is fraught with difficulties.

“As the 4th launch of Antares, it could be reasonably considered as still in the proving stage and most new rocket systems will require a convergence to reliability after bugs are ironed out, despite all the design and test rigour,” he said, in an email to FoxNews.com. “Launching rockets remains a risky business and in the end, every payload is riding on top of a controlled explosion.”