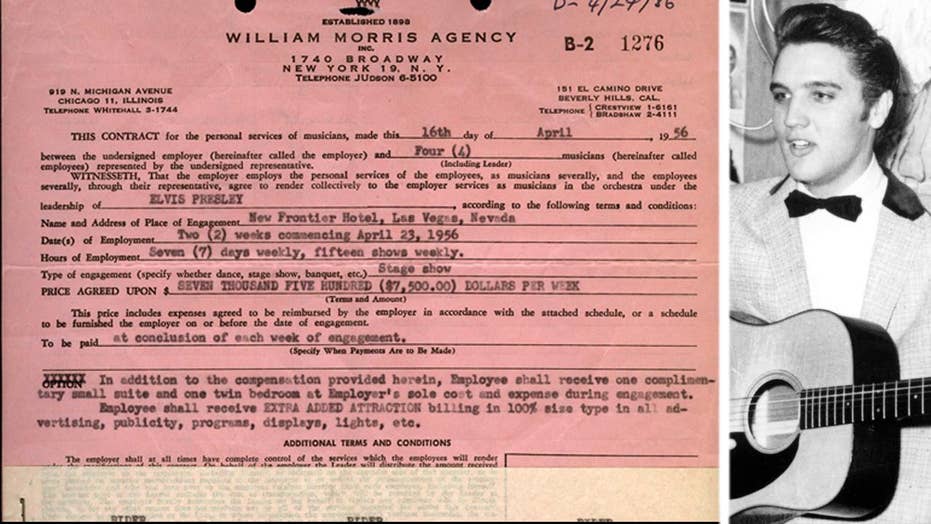 An iconic piece of music and Las Vegas history is up for auction: Elvis Presley’s first contract

Elvis Presley’s first Las Vegas contract will be auctioned in the U.K. later this month.

Described by auction house Henry Aldridge & Son as “an exceptionally iconic piece of Las Vegas and music history,” the William Morris Agency contract is signed by Presley in two places.

The contract covers Presley’s two-week engagement at the New Frontier Hotel in Vegas during late April and early May 1956.

A $5 MILLION NICKEL? EXTREMELY RARE 1913 COIN UP FOR AUCTION

The shows came at the start of Presley’s career and his performances in front of an audience of largely middle-aged men did not generate the level of hysteria associated with his later shows.

“This was still the early part of 1956 and Presley was on the verge of greatness, up until now Elvis had performed in front of screaming teenagers but things would be different in Las Vegas,” explained Henry Aldridge & Son, in a statement.

“Compared to the usual teenage hysteria, however, Elvis had a lukewarm acceptance from the middle-aged audience.”

A number of teenagers, however, did get to see and meet Presley in a special matinee performance on Saturday April 28, which was described as a resounding success.

Presley’s closing performance on May 6, 1956 was recorded and initially released on "Elvis Aron Presley," an 8-record box set released in connection with Presley's 25th Anniversary with RCA in November 1980.

Presley was paid $7,500 per week for his engagement at the New Frontier Hotel. When he returned to perform in the city 13 years later, he was a global superstar.

“In 1969 he signed up for a monthlong residency at the International Hotel as arguably the biggest rock and roll star in the world, he made more than $1 million in four weeks and ultimately became synonymous with the city," explained Henry Aldridge & Son.

Presley was a fixture on the Las Vegas entertainment scene until he passed away in 1977.

The contract, which has an Elvis Presley Museum certificate of authenticity, has a pre-sale estimate of $33,476 to $40,171.

The auction will take place on Saturday June 16.