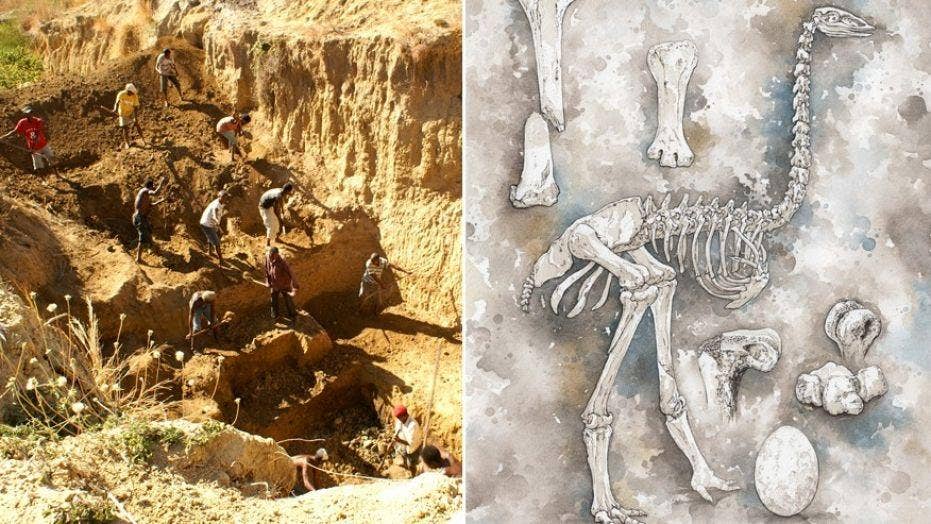 Scientist discover what may have killed world’s largest bird

A new discovery of the ‘Elephant bird’ may explain how the world’s largest birds were killed.

Analysis of bones from now-extinct elephant birds could shed new light on the fate of the giant fowls.

A team of scientists led by the Zoological Society of London (ZSL) studied skeletons of the huge birds that were discovered on the Indian Ocean island of Madagascar. The species of 10-foot-tall birds (known as Aepyornis and Mullerornis) weighed up to 1,100-pounds.

The bones were found in 2009 at the site of Madagascar’s Christmas River. Cut marks and fractures on the bones were likely made by prehistoric hunters, according to the experts. By using radiocarbon dating, the scientists discovered that the birds were killed around 10,500 years ago.

EGG OF EXTINCT ELEPHANT BIRD WAS MISLABELED AS FAKE FOR DECADES, MUSEUM REALIZES

The study is significant because previous research on lemur bones and other artifacts indicated that humans first arrived in Madagascar 2,400 to 4,000 years ago. The butchered bones therefore suggest that humans reached the island much earlier than previously thought.

Scientists published their findings in the journal Science Advances.

The new research also rekindles the debate about whether humans caused the extinction of the giant bird, according to Science. “We already know that Madagascar’s megafauna – elephant birds, hippos, giant tortoises and giant lemurs – became extinct less than 1,000 years ago,” said lead author Dr. James Hansford of ZSL’s Institute of Zoology, in a statement. “There are a number of theories about why this occurred, but the extent of human involvement hasn’t been clear.”

Indeed, the latest study suggest that humans may have co-existed with elephant birds for millennia. “Our research provides evidence of human activity in Madagascar more than 6,000 years earlier than previously suspected – which demonstrates that a radically different extinction theory is required to understand the huge biodiversity loss that has occurred on the island,” said Hansford. “Humans seem to have coexisted with elephant birds and other now-extinct species for over 9,000 years, apparently with limited negative impact on biodiversity for most of this period, which offers new insights for conservation today.”

Nonetheless, there are still questions to be answered about Madagascar’s early humans. “We know that at the end of the Ice Age, when humans were only using stone tools, there were a group of humans that arrived on Madagascar,” said the study’s co-author Professor Patricia Wright of Stony Brook University, in a statement. “We do not know the origin of these people and won’t until we find further archaeological evidence, but we know there is no evidence of their genes in modern populations. The question remains – who these people were? And when and why did they disappear?”

The marsh where the bones were found contained a large number of ancient animal remains. Experts speculate that the location may have been a major ‘kill site’ where prehistoric humans slaughtered their prey, but say that more research is needed before this can be confirmed.

Earlier this year, the Buffalo Museum of Science in Buffalo, N.Y. revealed that that a rare elephant bird egg in its collection had been mislabeled for decades. The egg had erroneously been labeled as a model.

Archaeologists in Austria recently uncovered a gruesome ‘kill site’ where Stone Age people slaughtered mammoths. The site, which was found during construction of a new bypass in Drasenhofen on the Czech border, contains mammoth tusks and bones. The remains have been dated to between 18,000 and 28,000 years ago.