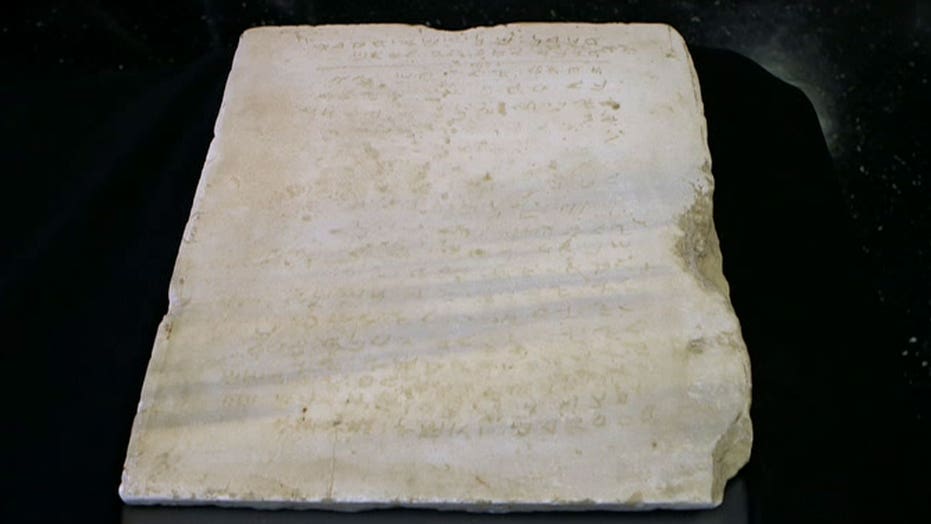 Earliest known stone inscription of Ten Commandments is up for auction, only version believed to still be intact today

The earliest-known complete stone inscription of the Ten Commandments sold at auction in Beverly Hills for $850,000 Wednesday night.

The auction opened with a $300,000 bid on the piece. The winning bidder does not wish to be identified.

CHRIST'S TOMB UNCOVERED: THIS IS WHAT EXPERTS DISCOVERED

Inscribed in an early Hebrew script called Samaritan, the tablet likely adorned the entrance of a synagogue destroyed by the Romans between A.D. 400 and 600, or the Crusaders in the 11th century.

The tablet is inscribed with 20 lines of letters in an early Hebrew script called Samaritan, which is derived jointly from Hebrew and Aramaic. Based on the letter forms, experts think that the stone was probably carved in the late Roman or Byzantine era between A.D. 300 and 500.

The auction house said the Israeli Antiquities Authorities approved export of the piece to the United States in 2005. The only condition was that it must be displayed in a public museum.

"The sale of this tablet does not mean it will be hidden away from the public," said David Michaels, Heritage Auctions director of ancient coins and antiquities. "The new owner is under obligation to display the tablet for the benefit of the public."

Weighing about 200 pounds, the stone was first uncovered in 1913 during excavations for a railroad station near Yavneh in western Israel, and was used as flooring in a private owner’s courtyard. The tablet was acquired by Y. Kaplan who brought in experts to study it. Antiquities Dealer Robert Deutsch bought in the artifact in the 1990s and Rabbi Saul Deutsch obtained it for his Living Torah Museum in 2005.