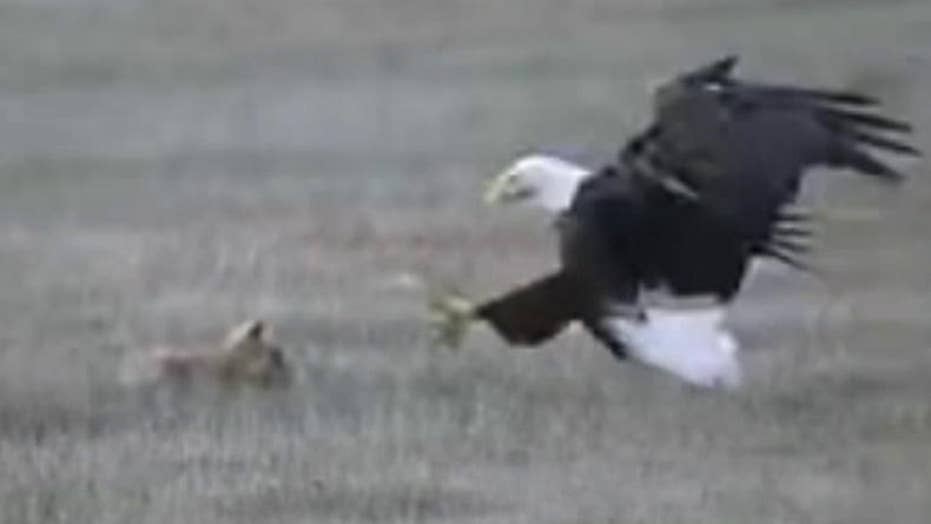 Eagle swoops down and grabs a fox that had just killed a rabbit.

Videos and photos captured a bald eagle attempting to snatch a rabbit from a young red fox as they battled it out 20 feet in the air in what a photographer called a “dramatic act of thievery.”

The dramatic sight at San Juan Island National Historic Park, in Washington state, was caught by photographers Kevin Ebi, of LivingWilderness.com, and Zachary Hartje. Ebi wrote in a blogpost on Monday he was at the park a few days ago watching the young red foxes, called kits, hunt just before sunset.

One of the kits caught a rabbit and held it in its mouth.

“I panned my camera with it to capture the action. Then behind me, I heard the cry of a bald eagle. I turned around and saw it approaching fast,” Ebi said.

The eagle and the fox put up a fight to have the rabbit. (Kevin Ebi/LivingWilderness.com)

The photographer said he knew the bald eagle was eyeing the rabbit in the fox’s mouth. He followed the action with his camera and waited for the bird’s talons to swoop down.

“To my surprise, the scene was even more dramatic than I expected. I thought the fox would drop the rabbit, giving the eagle an easy dinner,” Ebi said. “Instead, the fox, with its jaw still clenched on the rabbit, inadvertently got snagged by the bald eagle. The eagle lifted the young fox and rabbit into the sky triggering an even more dramatic struggle.”

The eagle was able to take the rabbit and dropped the fox on the ground. (Kevin Ebi/LivingWilderness.com)

The struggle ensued for about eight seconds 20 feet in the air, with both sides refusing to give up. The eagle was eventually able to snatch the rabbit out of the fox’s mouth and into its talon. The bird let the fox go, dropping him on the ground.

The fox survived the encounter and appeared unscathed, except for the lost meal. (Kevin Ebi/LivingWilderness.com)

Ebi continued, “Don’t worry: the fox was fine. It shook off the encounter and resumed playing with its fellow kits. I took several pictures of it after the ordeal and couldn’t find a single scratch.”

San Juan Island National Historical Park asks that visitors not approach any wildlife within 25 yards to protect the animals and to help keep them safe. Click here for more safety tips from the park.