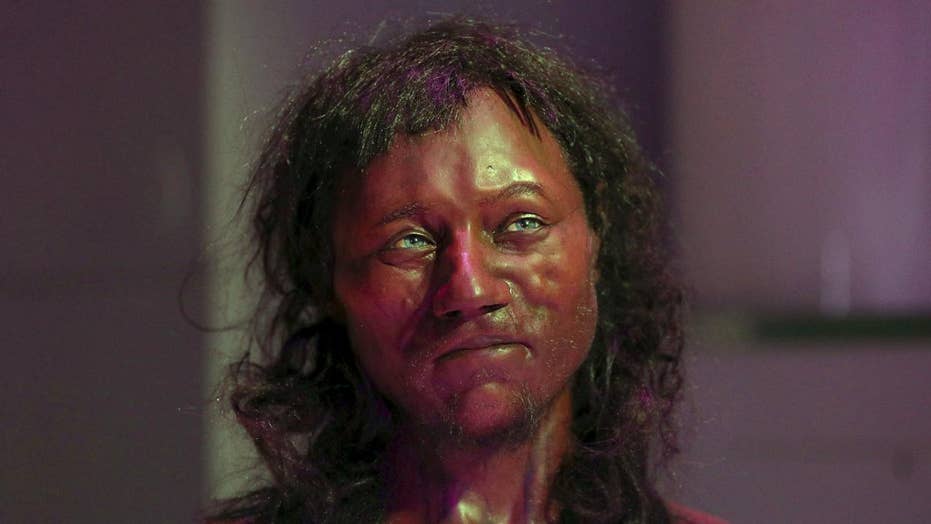 DNA research out of University College London and the Natural History Museum that reveals 'Cheddar Man,' a Mesolithic skeleton found in Gough's Cave in 1903, had blue eyes, dark curly hair, and

Think of a stereotypical Brit and you may imagine a pale cast member from Downton Abbey. A new study, however, shows early modern Brits from 10,000 years ago, who migrated from Europe over a land bridge into England, may not have been quite as pale as many of their Colin Firth-like contemporaries.

The Guardian reports on DNA research out of University College London and the Natural History Museum that reveals "Cheddar Man," a Mesolithic skeleton found in Gough's Cave in 1903, had blue eyes, dark curly hair, and "dark to black" skin.

The finding suggests that lighter-skinned Europeans evolved later than previously thought. "To come face-to-face with what this guy could have looked like ... [is] something a few years ago we couldn't have imagined," one researcher tells the BBC.

Scientists extracted his DNA by drilling a hole in his skull to draw out bone powder. They focused on genes tied to hair, eye, and skin color and found Cheddar Man didn't have the reduced-pigmentation gene those with lighter skin have today in many Euro populations.

The researchers suspect a cereal-based diet back then may have lacked vitamin D, and so lighter skin tones may have evolved to draw in more sunlight for vitamin D, as individuals with more melanin aren't as efficient at producing vitamin D as their lighter-skinned counterparts.

The upshot of the discovery, per the Guardian: "skin color was not always a proxy for geographic origin in the way it is often seen to be today." (All human eyes are actually brown.)