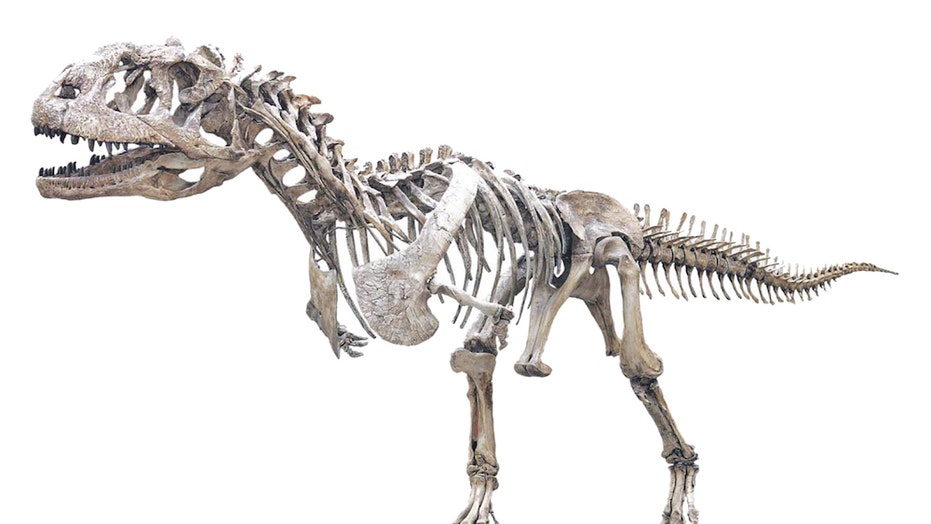 Dinosaurs may have gone extinct 65 million years ago thanks to a massive asteroid impact, but one of the last species on the planet had something in common with one of today's most fearsome creatures — sharks.

Researchers looked at the carnivorous Majungasaurus, the apex predator of its ecosystem, and found that they regenerated their teeth between 2 and 13 times faster than other carnivorous dinosaurs, growing a new tooth approximately every two months.

"This meant they were wearing down on their teeth quickly, possibly because they were gnawing on bones," the study's lead author, Michael D'Emic, an assistant professor of biology at Adelphi University, said in a statement. "There is independent evidence for this in the form of scratches and gouges that match the spacing and size of their teeth on a variety of bones—bones from animals that would have been their prey."

CT scan-generated models of the jaws of Majungasaurus (left), Ceratosaurus (center) and Allosaurus (right), with microscopic views of the interior of their teeth below each model. Stripes running from upper left to lower right in each microscopic image are daily deposited incremental lines, which allow the amount of time it took for a tooth to grow to be reconstructed. Credit: PLOS ONE

Though their teeth were dagger-like, Majungasaurus did not have strong teeth, similar to sharks or herbivore dinosaurs, causing them to regenerate at such a rapid rate, D'Emic added.

The researchers were able to uncover the findings using CT scans "on intact jaws to visualize unerupted teeth growing deep inside the bones," according to the statement. They were compared with two other species of carnivorous dinosaurs, Allosaurus and Ceratosaurus, to give them a greater idea on tooth-growing patterns.

"This project addresses yet another aspect of the biology of Majungasaurus, and predatory dinosaurs more generally," said one of the study's co-authors, Ohio University professor Patrick O'Connor, "heralding the next phase of research based on recent field discoveries."

The study was published in the scientific journal PLOS ONE.

The "apex predator" lived 230 million years ago when South America was still part of the supercontinent Pangea. Researchers discovered fossils of the dinosaur that were "complete and well-preserved," including teeth and claws that likely made the creature a "killing machine."

In September, researchers discovered that the Tyrannosaurus rex, the most fearsome predator to ever walk the Earth, had a stiff skull that allowed it to not shatter its own bones with its bite force, while simultaneously devouring its kill.