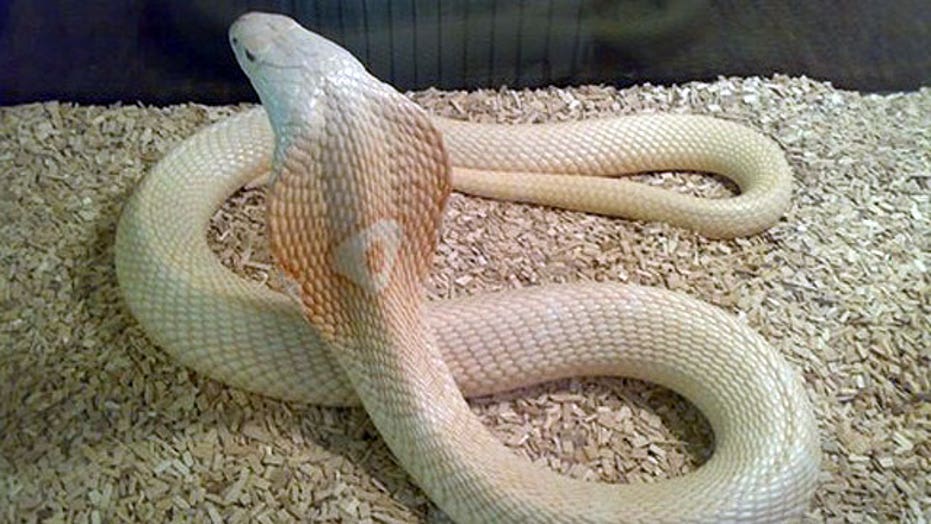 THOUSAND OAKS, Calif. – A deadly albino cobra that ran loose for days in a Southern California neighborhood was captured Thursday.

"We are overjoyed. We are glad that the public was not harmed," Los Angeles County spokesman Brandon Dowling said after county animal control officers nabbed the monocled cobra shortly after 3 p.m.

Television reports showed officers using a long-handled tonglike grabber to haul the snake from a pile of scrap lumber in a backyard and put it in a long wooden box. It was taken to an animal shelter.

The venom of the cobra is a neurotoxin that can kill within an hour. However it wasn't immediately clear whether the albino snake — which apparently escaped from captivity — still had its venom glands, authorities said.

The snake, which is several feet long, had been on the loose since at least Monday evening, when it reportedly bit a dog. However, the veterinarian who treated the animal said it appeared that the dog wasn't bitten but was hurt while trying to escape the snake, KNBC-TV reported.

County animal control officers and state wildlife officials poked through bushes and checked woodpiles, concentrating their searches during cooler morning and evening hours when the snake was more likely to be up and around.

There were no more confirmed sightings of the snake until Thursday afternoon, when it was seen slithering in the same Rancho Lane area where it originally was spotted.

Tanya Gray saw it crossing the road. She kept an eye on it but didn't approach.

"It wasn't my job to stop it or catch it," she told KCAL-TV.

"It was just shocking because I didn't think I'd be the one to find it," a youngster, Simona Lucchina, told KABC-TV. "We were just driving by and my dad was showing me 'this is where they lost the snake' and all of the sudden we just saw it. It was a big coincidence."

Before the snake was captured, authorities had warned residents to keep an eye on their children, to keep pets indoors and to call 911 if they spotted it.

Those who live in the neighborhood — which is surrounded by snake-friendly brush and wilderness areas — weren't panicked by the intruder.

"I think we're all a bit concerned, but growing up in an area where there are rattlesnakes, it's probably not quite as scary," said Susan McGrath, who lives several doors away from where the dog reportedly was bitten.

However, the cobra became a mini-media sensation and at least three Twitter accounts were started in its name. One, AlbinoMonocledCobra, had nearly 250 followers by Thursday afternoon.

The monocled cobra is native to Southeast Asia, parts of India and China, and can grow to 4 feet or more. Its name derives from a circle or ring on the back of its hood.

Cobras are illegal to own in California except for educational and scientific purposes, and a permit is required.

The cobra apparently escaped from captivity, although authorities had not found the owner. Dowling said Thursday that investigators are following "a few leads" on where the snake came from.