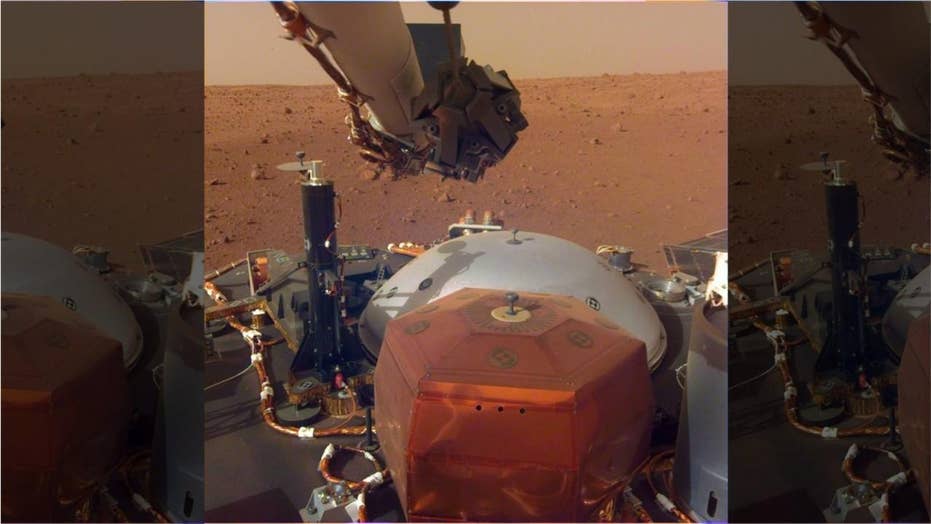 A winter wonderland sits amid a sandy Martian surface — at least, that's the story new images released by the European Space Agency (ESA) from the Red Planet seem to tell.

The stunning photos, which reveal a 50-mile-wide crater filled with ice, were shared by the ESA's Mars Express spacecraft on Thursday. The Korolev crater is located on the northern lowlands of Mars, and it's consistently covered in a blanket of ice about a mile thick, the ESA said in a recent news release.

"A beautiful #winter wonderland... on #Mars!" the ESA announced in a tweet, which was shared nearly 10,000 times as of Friday afternoon.

The breathtaking image was a creation made up of five images taken by the Mars Express High Resolution Stereo Camera (HRSC) aboard the unmanned Mars Express spacecraft. It also features topographic views, which show the complete circular depression on the planet's surface.

"It is an especially well-preserved example of a martian crater and is filled not by snow but ice," the ESA explained. "This ever-icy presence is due to an interesting phenomenon known as a ‘cold trap’, which occurs as the name suggests."

"The very deepest parts of Korolev crater, those containing ice, act as a natural cold trap: the air moving over the deposit of ice cools down and sinks, creating a layer of cold air that sits directly above the ice itself," the ESA added.

The extra layer of cold air acts as a shield, preventing the ice from ever melting. It helps that the crater is located "just south" of the planet's well-known polar cap Olympia Undae, a vast dune field.

"The areas where ice is stable are highly dependent on both latitude and elevation, so there is only a small area on Mars where it is cold enough for ice in the shadowed interior of craters but it isn't present on the surface," Siebach told Fox News via email Friday.

ESA's Mars Express is marking 15 years exploring Mars' surface this month and will continue sharing images from its impressive trip to celebrate the noteworthy anniversary.

A view of the ice-filled Korolev crater on Mars. (ESA/DLR/FU Berlin)

Just like Earth, Mars has four seasons — though they last about "twice as long," NASA says.

"The southern hemisphere has “harsher” seasons than in the north. During Southern winter, Mars is farthest away from the Sun in its elliptical orbit around the Sun," NASA explained in a 2016 blog post.

The majority of the Red Planet is made up of sand, which typically fills the air with plumes of red dust, but ice does exist near its poles. Also like Earth, Mars has a North and South Pole.

"But while Earth's polar ice caps consist solely of water ice, Mars' polar caps are a combination of water ice and carbon dioxide ice. As the Martian seasons change, the carbon dioxide ice sublimates (vaporizes) in summer, revealing the surface, and freezes again in winter," the University of Arizona's Phoenix Mars Mission describes on its educational website.

"The catch is that the atmosphere is so thin that only the solid (ice) and gas (vapor) forms of water are stable on the Martian surface. We can see evidence for rivers and lakes that existed more than 3 billion years ago, so we know that there was a time in history when liquid water was stable on the Martian surface, but today it is exclusively present in the form of ice and a tiny amount of gas," she explained.

In September 2012, NASA discovered a stream once ran across the planet.

Scientists had previously found examples that suggested there was once water on the planet, but NASA said this evidence of a stream bed was the "first of its kind."

NASA's car-sized Curiosity rover, a $400 million space vehicle, picked up rocks that were made up of ancient stream bed gravel, proving water used to flow where the rover was driving — between the Gale Crater and a mountain inside the crater called Mount Sharp.

"From the size of gravels it carried, we can interpret the water was moving about 3 feet per second, with a depth somewhere between ankle and hip deep," Curiosity science co-investigator William Dietrich of the University of California, Berkeley, said in a blog post on NASA's website. "Plenty of papers have been written about channels on Mars with many different hypotheses about the flows in them. This is the first time we're actually seeing water-transported gravel on Mars. This is a transition from speculation about the size of stream bed material to direct observation of it."