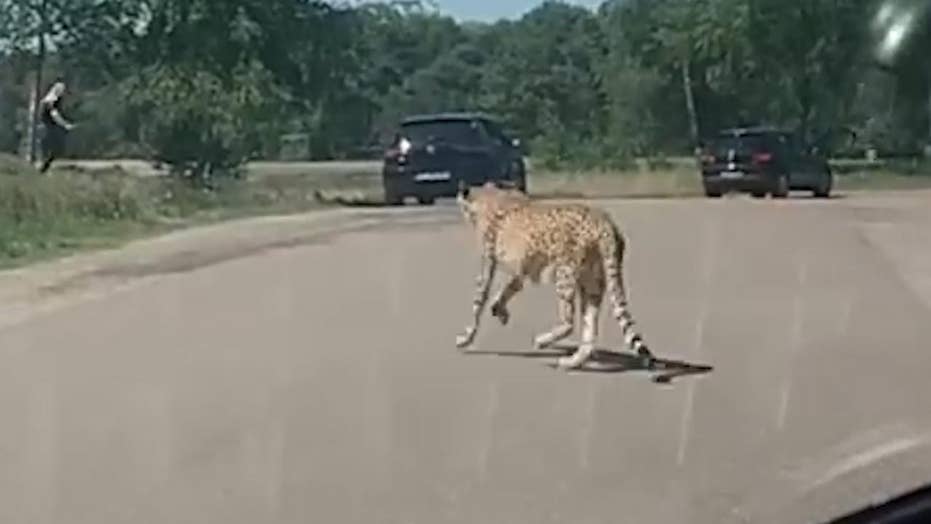 Caught on camera: A family visiting a safari park in the Dutch city of Tilburg approached a group of cheetahs and quickly learned that was a horrible mistake.

A French family of three managed to escape a coalition of hungry cheetahs unscathed after they exited their vehicle to snap pictures of the wild animals — and the heart-stopping moment was caught on tape.

At first, the three cheetahs appear calm, lounging on a patch of grass at Safari Park Beekse Bergen, in the Netherlands, as the family parks their car a few feet away. A man exits the car and begins to take pictures of the cats. Moments later, a woman also gets out of the vehicle to put some items in the trunk, with a small child getting out behind her.

They eventually get back in their car and drive off — seconds before one of the cheetahs takes notice. The large cat begins to chase the car as it drives down a dirt path.

Seconds later, the video pans to the family, once again leaving their car and climbing a small hill to take pictures of the creatures. But this time, the cats are ready to pounce. A group of tourists in the car behind them, who captured the terrifying encounter on video, gasp and yell as they watched the cats surround the family.

As the cheetahs start to circle, the man runs and the woman is seen picking up the child, stopping to stare at one of the wild cats before quickly walking away. One of the cheetahs follows closely behind, lunging at the family as they scramble to get back inside their car.

Fortunately, the family makes it just in time.

A park spokesman told the station visitors are instructed never to leave their vehicles and warned about the dangers of interacting with wild animals.

"We inform visitors about the risks in several languages throughout the park," the spokesman told NOS.

"These people have been incredibly lucky."

Park officials said they heard several reports about the incident, but didn't realize the severity of the situation until a video of the near-attack surfaced on YouTube this week.

"The cheetahs are on a food schedule so they are not extremely hungry and are not in the hunt," Wildt told NOS. "In the first instance, they have the same reaction as when someone rings in unexpectedly, they think, 'Hey, something strange is happening in our territory.'"

But at the end of the day, Wildt reminded parkgoers, they're still wild animals and people should heed the warnings placed around the park to stay inside the safety of their vehicles.

"These people have been incredibly lucky," he added.

In March, a man traveling on an African safari at Tanzania’s Serengeti National Park had a close encounter with a cheetah after the animal jumped into his open car. The cat spent about 10 minutes investigating the car before exiting, the BBC reported at the time.

Cheetahs are the fastest animals in the world, clocking in at speeds of up to 61 miles per hour, according to the Conservation Institute. The predators use speed to their advantage when targeting prey.

"The cheetah is a sprinter, not a long distance runner, but pairs agility with speed for deadly attack runs," the organization explained on its website. "Cheetahs are also very fast accelerators, and can ramp up their speed four times faster than human beings can."