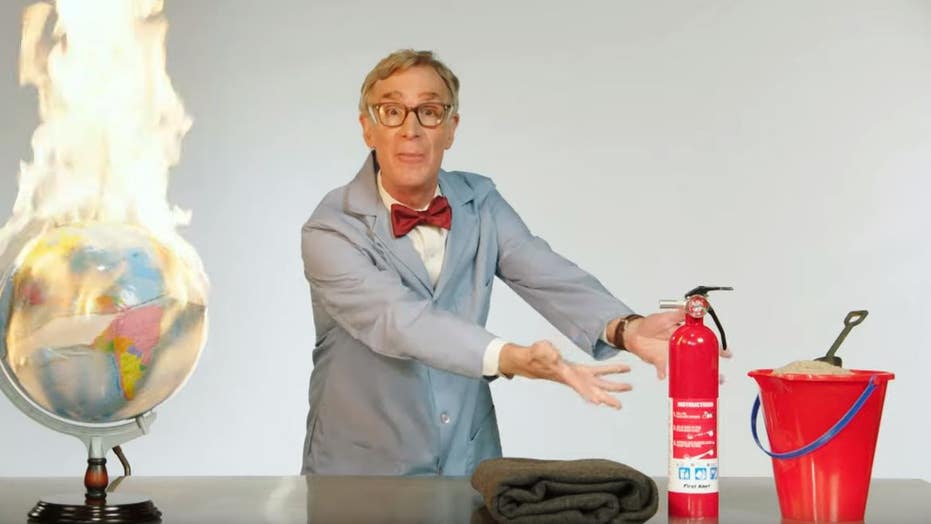 Science commentator Bill Nye had some choice words about the need for urgent action to combat global warming.

On "Last Week Tonight With John Oliver" on Sunday, after the host discussed the Green New Deal, Nye demonstrated an experiment that was different from his usual more staid fare.

Appearing in a lab coat and donning safety glasses, Nye opined "when something costs more, people buy less of it," in reference to a possible carbon tax that's been floated by politicians as a way to mitigate climate change.

Oliver later then asked for a "cool stunt" to make the argument more persuasive and exciting.

'TRANSFORMATIVE CHANGES' ARE NEEDED TO SAVE NATURE AND OURSELVES, MAJOR REPORT WARNS

"When we release carbon," Nye said, pointing to pictures of various disasters taped to a chalkboard, "all of us pay for that in the form of things like fires, floods and crop failures. Putting a fee on carbon creates incentives to make less carbon, and more importantly, it incentivizes the development of low carbon technology."

Once again, after a round-up of recent news coverage about carbon pricing and the Green New Deal, Oliver pleaded for a "fun" experiment.

“By the end of this century, if emissions keep rising, the average temperature on Earth could go up another four to eight degrees. What I’m saying is the planet’s on f------ fire,” Nye said while setting a globe on fire with a blowtorch that had been hidden under his desk.

“There are a lot of things we could do to put it out, are any of them free?” he asked, gesturing towards the other items on the desk. “No of course not, nothing’s free you idiots, grow the f--- up. You’re not children anymore. I didn’t mind explaining photosynthesis to you when you were 12 but you’re adults now and this is an actual crisis. Got it? Safety glasses off motherf-----.”

"I think we've all broken Bill Nye," Oliver says at the end.