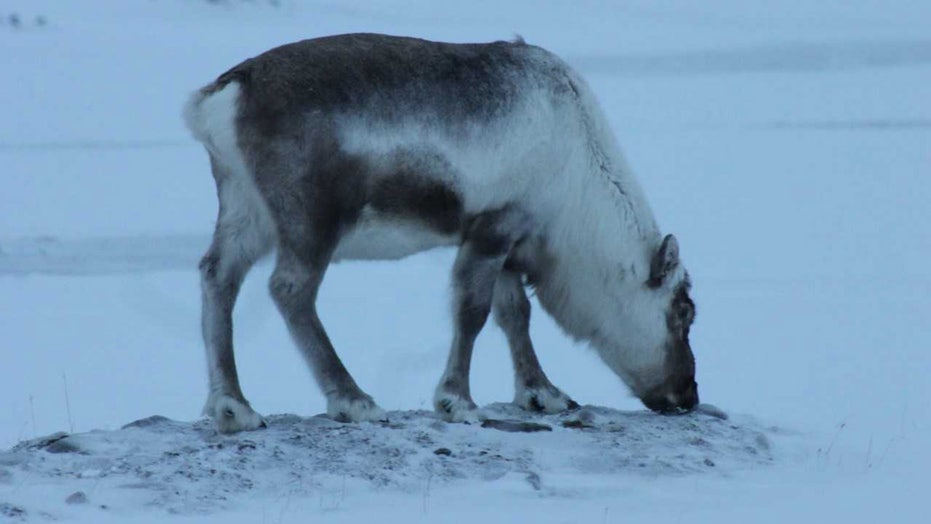 As the planet warms due to climate change, the Arctic winters are seeing longer open water spells and less sea ice. It also now rains more often than snow during this period, something that is directly affecting wildlife like the Svalbard reindeer.

Named after the group of Norwegian islands they’ve lived on for 5,000 years, these 20,000–plus reindeer are now eating seaweed to survive the increasingly warm winters. According to researchers from the Norwegian University of Science and Technology's Centre for Biodiversity Dynamic, the reindeer are turning to seaweed because the plants they normally eat are becoming harder to get to.

More rain is now falling instead of snow, which causes the snow on the ground to freeze over (also known as “icing”), burying the tundra vegetation under thick ice.

The research team first noticed that the reindeer’s feeding behavior might have changed when the animals started gathering on the shoreline. They're usually further inland, where they rake at the ice with their hooves to get to vegetation. Suspecting that the reindeer were now surviving on kelp, the team set about the undesirable task of collecting poop for analysis. They then compared the stable isotope ratios of carbon, nitrogen and sulphur values of excrement from seaweed-eating reindeer with fecal matter from the terrestrial plant-eating reindeer.

Sure enough, the levels were markedly different, though it was also determined that the reindeer were eating the seaweed in addition to normal food. There are still some ice-free places for the reindeer to graze, though they’re getting more and more sparse.

Kelp isn’t as nutritious as the tundra plants the reindeer normally eat. It also seems to be giving the reindeer diarrhea, probably from the salt content. Currently, seaweed is being more or less used as an emergency ration, with the reindeer turning to it only during spells of severe icing. According to the study, the kelp-eating has been happening for over 10 years.

It’s not just the seaweed diet that poses a problem. Unlike the caribou in Alaska, Svalbard reindeer don’t have to live in fear of predators such as wolves or bears. Now, as they spend more time on the shoreline looking for seaweed to eat, they’re left open to attacks from hungry polar bears who can’t find seals to eat, thanks in large part to less sea ice.

MYSTERY SEA  OPENED UP DURING THE ANTARCTIC WINTER. NOW, SCIENTISTS KNOW WHY.

So what can be done to help the reindeer, besides reducing climate change? According to Dr. Jeffrey Welker, a professor for the Department of Biological Sciences at the University of Alaska Anchorage and one of the study’s co-authors – not much.

“[No steps to help] are planned as Svalbard reindeer are not actively managed-they are not fed hay in winter,” he told Foxnews.com. “More frequent icing events within a year, and year after year will put a lot of pressure on Svalbard reindeer, and reindeer in other Arctic regions as well as caribou in places like Alaska.”

The study can be found in the journal Ecosphere.