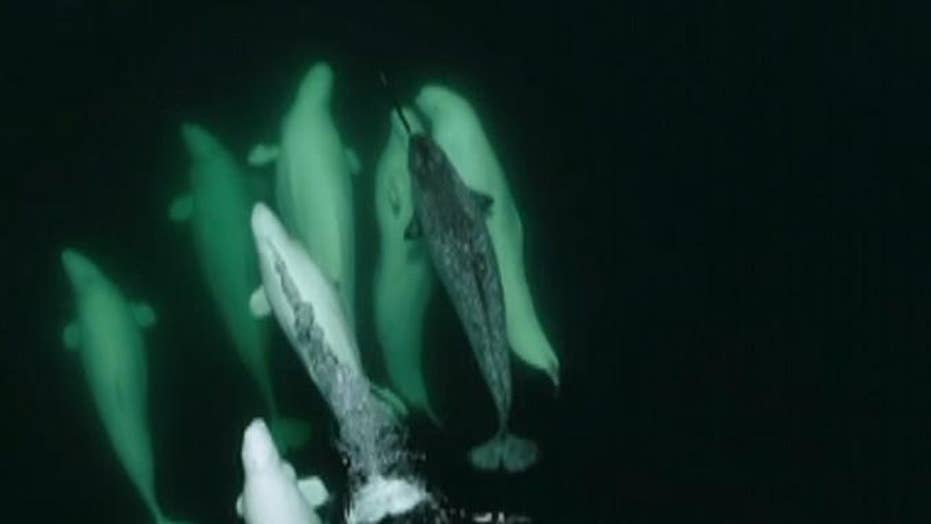 Amazing video: Narwhal taken in by group of beluga whales

A lost narwhal was spotted swimming and playing with a group of beluga whales over 600 miles away from its natural habitat.

A band of beluga whales took in a lost narwhal and made it one of their own, researchers said after discovering the lone whale swimming and playing with its new friends.

The narwhal was discovered in the St. Lawrence River, more than 620 miles from its normal habitat, swimming with about dozen of St. Lawrence River belugas. Narwhals normally live in the Arctic near Canada, Greenland, Russia and Norway, CBC News reported.

Footage of the narwhal swimming with the belugas was taken with a drone from the Group for Research and Education on Marine Mammals, a non-profit that focuses on whale research.

GREMM said the narwhal was believed to be a juvenile, swimming with mostly male belugas.

"It behaves like it was one of the boys," Robert Michaud, the president and scientific director of GREMM said.

Researchers said the narwhal adopted beluga-like behavior such as blowing bubbles. Belugas and narwhals are both social animals but they don’t interact often when they’re in northern waters together, researchers said.

GREMM also believed the narwhal was the same whale spotted in 2016 and 2017 with a pack of belugas. Researchers believed there was a chance belugas and narwhals may interbreed in the decades to come to create a “narwhal-beluga hybrid.”

“If this young narwhal spends his life with belugas, we’ll have a lot of information to learn and share,” Michaud said. “I hope I’ll be there to see it.”