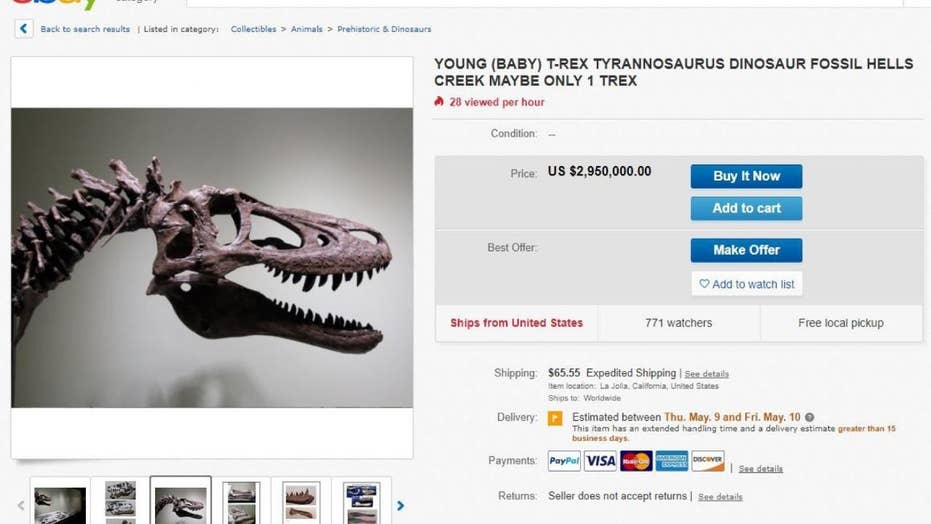 A rare baby T-Rex skeleton listed on eBay for $3Million has infuriated paleontologists.

A fossil hunter is being blasted for putting the skeleton of a baby Tyrannosaurus rex — claimed to be "the only one in the world" — on eBay for a whopping $3 million.

It's unclear why archaeologist Alan Detrich, who discovered the 15-foot-long baby T. rex near Jordan, Mont., about six years ago, suddenly decided to put the skeleton up for auction earlier this month.

The 68-million-year-old dinosaur was still on exhibit at the University of Kansas Natural History Museum in Lawrence when it was first listed on the e-commerce site. Detrich, a Kansas native, donated the fossil to the museum in 2017. The museum said it has since cut ties with Dietrich and confirmed it was not connected to the sale following backlash from patrons.

"The KU Natural History Museum does not sell or mediate the sale of specimens to private individuals," museum director Leonard Krishtalka said in a statement. "Accordingly, the specimen on exhibit-loan to us has been removed from exhibit and is being returned to the owner. We have asked that the owner remove any association with us from his sale listing."

On eBay, Detrich describes the baby T. rex as one of a kind.

"This Rex was very a very dangerous meat eater.  It's a RARE opportunity indeed to ever see a baby REX, if they did not grow quickly they could not catch prey and would die. Histology shows the specimen to be approximately 4 years old upon death," he explained in a description of the listing, crediting Curator of Vertebrate Paleontology from Florida's Natural History Museum for reconstructing the 21-inch skull. "Many of the bones are waiting to be identified, but every day more and more are being tagged."

On average, 30 people view the post every hour and hundreds more have been documented "watching" the sale at the same time. According to the listing, worldwide expedited shipping would cost an additional $65,555.

Despite the interest, paleontologists are not pleased with the idea that the skeleton could remain in a private collection indefinitely.

The Society of Vertebrate Palaeontology (SVP), a professional organization of scientists that advocate for the preservation of vertebrate fossils, wrote an open letter to Dietrich last week criticizing his decision to sell the priceless skeleton.

"The [SVP] is concerned because the fossil, which represents a unique part of life’s past, may be lost from the public trust, and because its owner used the specimen’s scientific importance, including its exhibition status at KU, as part of his advertising strategy," the organization wrote. "These events undermine the scientific process for studying past life as well as the prospect for future generations to share the natural heritage of our planet."

The group argued that if the fossil is removed from public access then it hinders the opportunity to study it further, potentially drawing vital conclusions about history from its bones.

"Scientific practice demands that conclusions drawn from the fossils should be verifiable: scientists must be able to reexamine, re-measure, and reinterpret them (such reexamination can happen decades or even centuries after the fact)," SVP added, in part. "Furthermore, technological advances, new scientific questions, and opportunities for synthetic research mean that new research often utilizes fossils that were originally collected with other purposes in mind."

Earlier this month, in an interview with The Wichita Eagle, Dietrich, too, marveled at the idea paleontologists might learn more about the life of the fascinating creature.

“Science and paleontology is live fast, die young, make a pretty corpse. That’s what this baby T. rex did — died young and made a pretty corpse," Dietrich told the newspaper. "But because he did, we’ll learn things that we didn’t know before.”

As of Wednesday morning, the baby dinosaur was still listed on eBay, but had not received any bids.