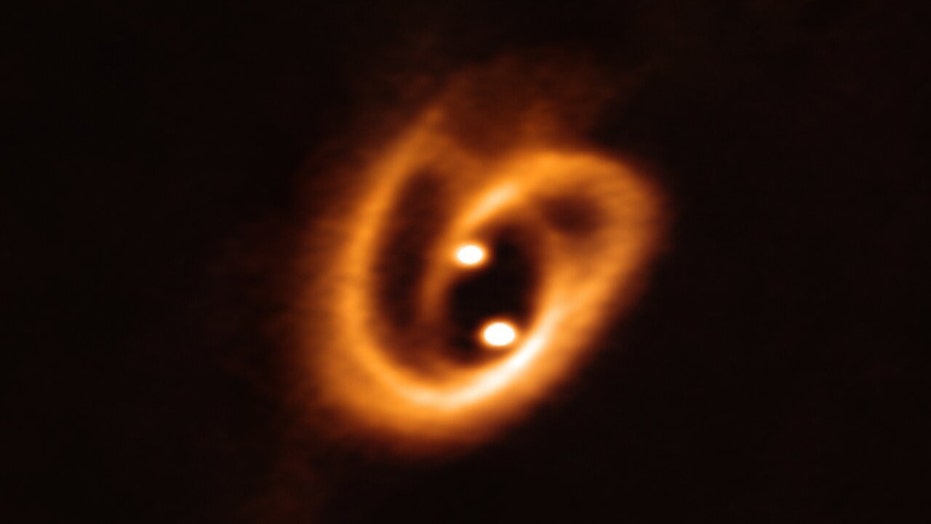 This is one "pretzel" that's definitely going to make you thirsty.

Astronomers have captured an incredible image of two newborn stars in the [BHB2007] 11 system described as a "cosmic pretzel," made up of a network of filaments of gas and dust.

“We see two compact sources that we interpret as circumstellar disks around the two young stars,” said the study's lead author, Felipe Alves, in a statement. “The size of each of these disks is similar to the asteroid belt in our Solar System and the separation between them is 28 times the distance between the Sun and the Earth.”

The Atacama Large Millimeter/submillimeter Array (ALMA) captured this unprecedented image of two circumstellar disks, in which baby stars are growing, feeding with material from their surrounding birth disk. The complex network of dust structures distributed in spiral shapes remind of the loops of a pretzel. These observations shed new light on the earliest phases of the lives of stars and help astronomers determine the conditions in which binary stars are born. (Credit: ALMA/ESO/NAOJ/NRAO)

MILKY WAY GALAXY ON 'COLLISION COURSE' WITH NEARBY 'MONSTER' GALAXY

The [BHB2007] 11 system is part of the Barnard 59 nebula, which is roughly 700 light-years from Earth. A light-year, which measures distance in space, equals 6 trillion miles.

The two circumstellar disks are surrounded by an even larger disk, one that has the total mass equal to that of 80 Jupiters while displaying the pretzel looops, a result that researchers note is important.

“This is a really important result,” the study's co-author, Paola Caselli, managing director at MPE, stressed. “We have finally imaged the complex structure of young binary stars with their feeding filaments connecting them to the disk in which they were born. This provides important constraints for current models of star formation.”

“We expect this two-level accretion process to drive the dynamics of the binary system during its mass accretion phase,” Alves added. “While the good agreement of these observations with theory is already very promising, we will need to study more young binary systems in detail to better understand how multiple stars form.”

The study has been published in the journal Science.