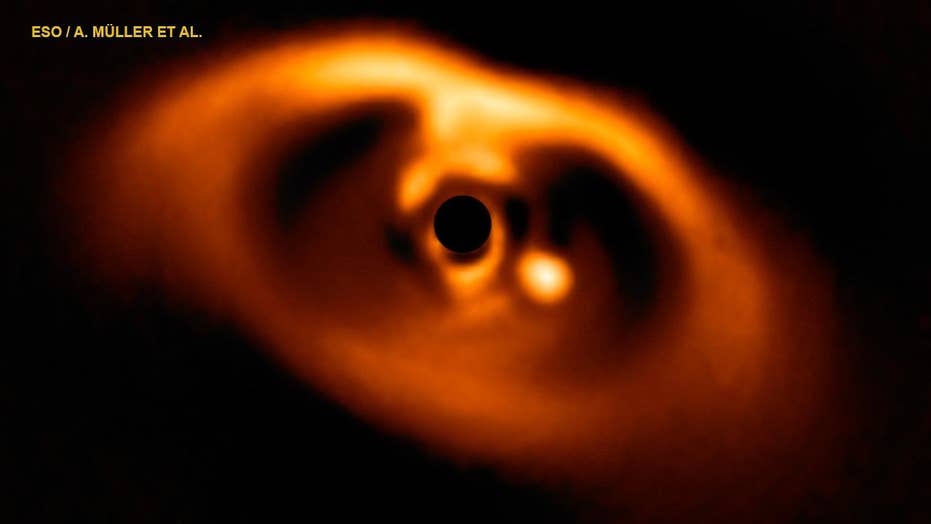 Astronomers capture first ever pictures of planet being born

For the first time ever, astronomers have discovered a planet being formed and have shared the awe-inspiring image. The planet, known as PDS 70b, was discovered by the European Southern Observatory's Very Large Telescope in Chile and its planet-finding instrument, SPHERE.

It's not often news should be read while listening to "Also sprach Zarathustra," but if there is ever a case for it, it may be today. For the first time ever, astronomers have discovered a planet being formed and have shared the awe-inspiring image.

The discovery of the planet's formation, known as PDS 70b, was made possible thanks to the European Southern Observatory's Very Large Telescope in Chile and its planet-finding instrument, known as SPHERE. Two sets of researchers, published in two different papers in the journal Astronomy & Astrophysics on Monday, detailed how a planet is formed.

"These discs around young stars are the birthplaces of planets, but so far only a handful of observations have detected hints of baby planets in them," Miriam Keppler of the Max Planck Institute for Astronomy, who led one team, said in a statement. "The problem is that until now, most of these planet candidates could just have been features in the disc."

SPHERE is widely considered to be one of, if not the most powerful planet-finders available.

The research reveals that PDS 70b is a giant, with a mass "a few times that of Jupiter." Its' surface temperature is approximately 1000°C, which the European Southern Observatory (ESO) said in the statement was "much hotter than any planet in our own Solar System." Data compiled by SPHERE also allowed the researchers to deduce that the planet's atmosphere is cloudy.

For comparison purposes, NASA notes that the temperature of Jupiter's center is approximately 24,000°C, "hotter than the surface of the Sun!"

PDS 70b is approximately 1.86 billion miles (roughly 3 billion kilometers, or the same distance from Uranus to the Sun) away from the star it orbits, a young dwarf star named PDS 70. The planet takes approximately 120 years to orbit its star, the researchers added in the research paper that detailed their findings.

In the above image, the dark area at the center is due to a coronograph, ESO said, a mask that "blocks the blinding light of the central star and allows astronomers to detect its much fainter disc and planetary companion." Without the mask, the light from the planet would be overhwhelmed by PDS 70.

André Müller, who is also with the Max Planck Institute and led the second team, said that Keppler's results give "us a new window onto the complex and poorly-understood early stages of planetary evolution."

BUZZ ALDRIN:HOW WE CAN MAKE MARS MISSIONS A REALITY

"We needed to observe a planet in a young star's disc to really understand the processes behind planet formation," Müller added in the statement.

Thanks to the discovery, researchers are now confident that they can test their theories on how planets are formed.

"After more than a decade of enormous efforts to build this high-tech machine, now SPHERE enables us to reap the harvest with the discovery of baby planets!” Thomas Henning, director at the Max Planck Institute for Astronomy said in the statement.