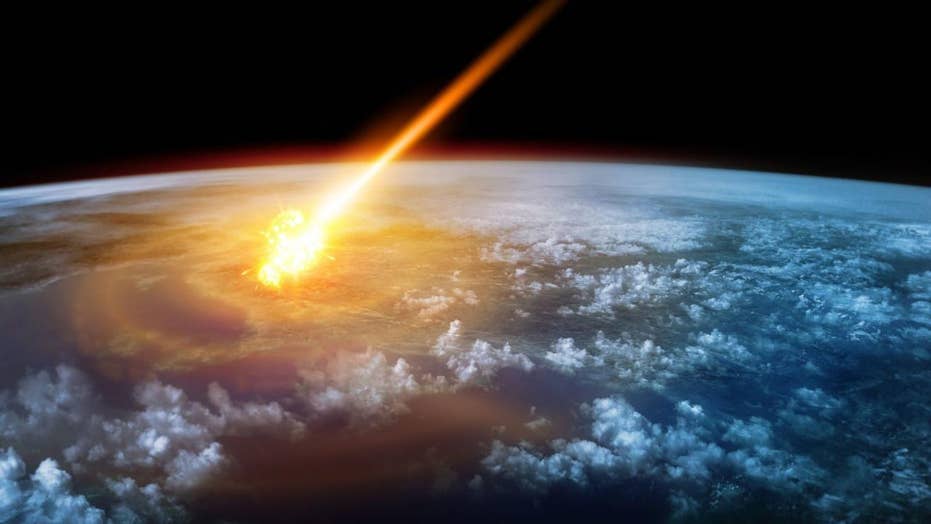 Asteroids have been hitting Earth for nearly 300 million years

Scientist study why asteroids have been crushing Earth for nearly 300 million years.

Asteroids have been hitting the Earth for nearly 1 billion years, but the atmosphere has largely shielded the planet from some catastrophic events. However, some space rocks make their way through — including the one that wiped out the dinosaurs.

But a new study notes that, over the past 290 million years, asteroids have been impacting the Earth at triple the rate they were previously and scientists aren't sure why.

After looking at 1 billion years' worth of asteroid impacts on both the Earth and Moon, researchers found that dinosaurs' fate was perhaps an inevitability.

NASA PLANS TO CRASH A SATELLITE INTO AN ASTEROID

"It's perhaps fair to say it was a date with destiny for the dinosaurs -- their downfall was somewhat inevitable given the surge of large space rocks colliding with Earth," Thomas Gernon, associate professor of Earth Science at the University of Southampton and the study's co-author said in a statement.

The researchers aren't sure what has caused the spike over the past 290 million years, but they believe it may be due to the "large collisions" that took place in the main asteroid belt between the orbits of Mars and Jupiter.

These types of events could cause chunks of space rock to float off into space and eventually become asteroids that blitz the Earth and Moon.

So they also looked at crater impacts on the Moon, which is not subjected to the forces of plate tectonics to get a better idea of the rate of impact. In total, they looked at 111 lunar craters with a diameter of more than 6.2 miles that are less than a billion years old to get an idea.

"It was a painstaking task, at first, to look through all of these data and map the craters out without knowing whether we would get anywhere or not," said the study's lead author Sara Mazrouei in the statement.

In conjunction with images from NASA's Lunar Reconnaissance Orbiter, which takes infrared images of the Moon, the researchers said younger craters are covered by more boulders and rocks than older craters, due to the boulders at the older strikes getting worn down from a constant stream of tiny meteorites.

"This means that the Earth has fewer older craters on its most stable regions not because of erosion but because the impact rate was lower prior to 290 million years ago," study co-author William Bottke, an asteroid expert at the Southwest Research Institute in Boulder, Colorado, said in the statement.

For its part, NASA has been implementing plans for years to protect the Earth from a catastrophic asteroid strike. In June, the government space agency unveiled a new, updated plan to protect Earth and predict the chances for a threat from a near-Earth object (NEO), outlining five goals, including enhanced detection and improved modeling.

There are over 18,300 recorded NEOs and just over 8,000 of them are over 100 meters or larger, Lindley Johnson, NASA’s planetary defense officer, said at the time.

In 2016, NASA opened a new office to track asteroids and comets that come too close to Earth, known as the Planetary Defense Coordination Office (PDCO). The PDCO formalizes the agency’s existing program for detecting and tracking NEOs, which NASA has been studying since the 1970s.