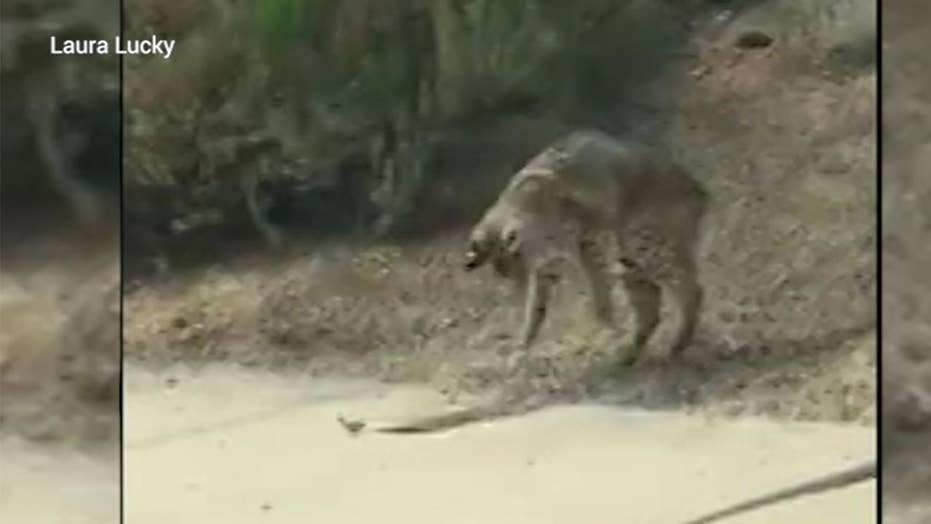 WILD video: Fierce battle between a bobcat and rattlesnake

A fierce battle between a bobcat and diamondback rattlesnake was caught on camera by a real estate agent in Scottsdale, Arizona.

Arizona real estate agent Laura Lucky was not expecting to see a fight between two predators when recently showing a California couple a home in Scottsdale.

In a video of the vicious battle, posted by Lucky on Tuesday, a hungry bobcat is seen attacking a rattlesnake. Lucky told Fox10 the rattler bit the bobcat shortly before she started recording, but that didn't stop the feline from pursuing its next meal.

“The rattlesnake had come up and bit the bobcat on the lip. The cat flew. It was very surreal,” she told Fox10.

In an interview with Fox News on Friday, Lucky said she had “never seen anything quite like that before,” adding that the state lived up to its “Wild West stereotype” in the video.

Lucky said she was driving on Jomax Road in Scottsdale when she first noticed the bobcat. At first, she slowed her speed to get a good look at the feline. After seeing the rattler, however, she “slammed on her brakes and put the car in reverse" to get a "front-row seat" to view the action.

“My clients were loving the entertainment,” she joked.

Eventually, the bobcat appeared to win the duel -- dragging the rattlesnake away.

Lucky, whose video had more than 700,000 views by late Friday afternoon, said that most people who’ve seen the footage have been “shocked” or “jaw-dropped.”

“It’s not something that you see every day,” she said.