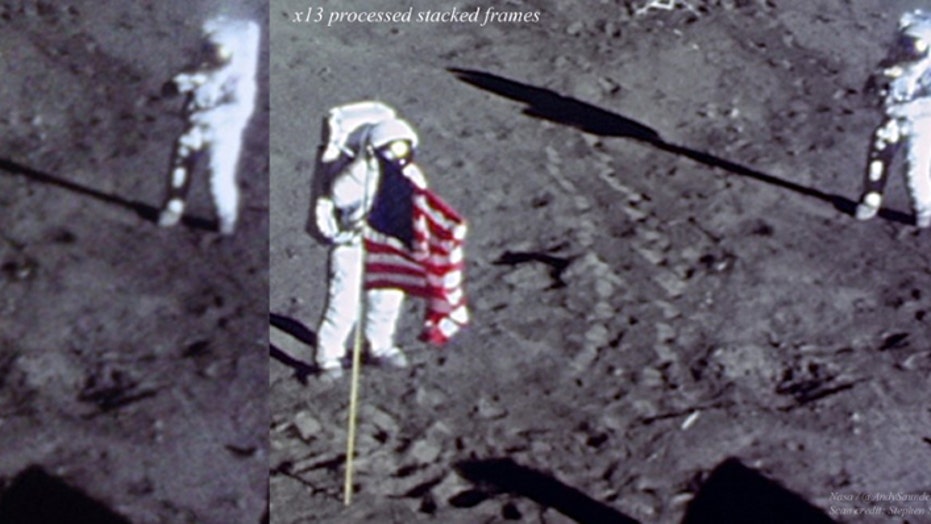 High-definition images of Apollo 11 astronaut Buzz Aldrin standing on the surface of the Moon were released Monday on the occasion of Aldrin's 90th birthday.

"This is the moment one of the most iconic ever photographs is taken, it's of Buzz Aldrin saluting the U.S. flag," Saunders said in an email to Fox News. "[Apollo 11] gave me the opportunity to actually lift 13 separate frames which could be stacked to improve the signal/noise ratio and push the processing as hard as possible to reveal some terrific detail. You can even clearly see Neil [Armstrong] holding the camera the moment the infamous photograph is taken."

Saunders, who also touched up another photo of Aldrin looking at the flag on the Moon in 2019, added that the "improved color and exposure" of transfer allowed for people to see Aldrin's face through his visor.

"It's a wonderful portrait too as it includes the U.S. flag and I think his shadow is also pretty epic to produce an image that Buzz himself will hopefully enjoy," Saunders explained.

Aldrin, the second man to walk on the Moon, turned 90 on Monday.

Directed by Todd Miller, "Apollo 11" is a documentary that uses archived footage to focus on the historic space mission. It premiered at the Sundance Film Festival on Jan. 24, 2019 and has been nominated for Best Documentary by the British Academy Film Awards (BAFTA).

July 20, 2019 was the 50th anniversary of the Apollo 11 Moon landing. Since then, only 10 other astronauts, all Americans, have set foot on the Moon.