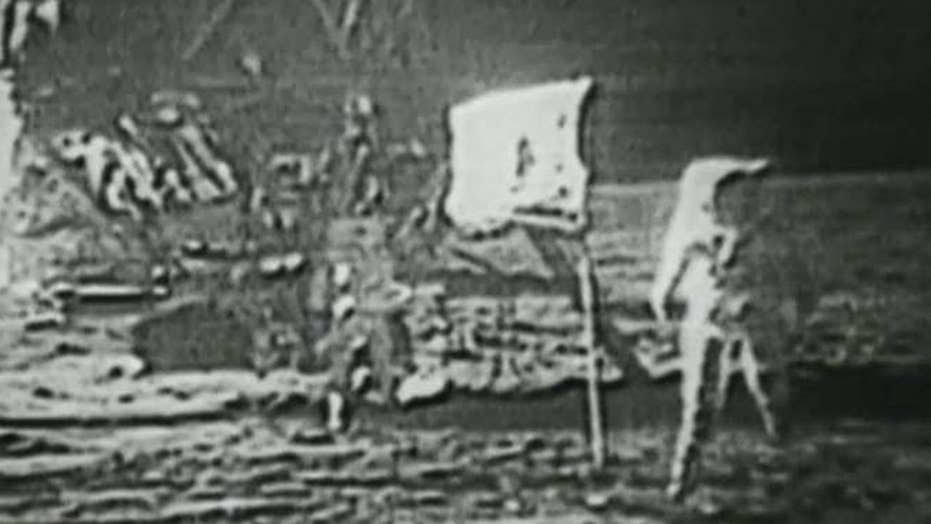 America celebrates the 50th anniversary of the moon landing

Buzz Aldrin may have been the second man to walk on the moon, but he was the first to knock a troll into outer space.

The famed Apollo astronaut faced possible battery charges back in September 2002 after he was confronted by a moon-landing conspiracy theorist who claimed that his famous moonwalk with Neil Armstrong never happened.

"Why don't you swear on the Bible that you walked on the moon?" Aldrin was asked incessantly by the heckler as he tried to go about his daily business.

BUZZ ALDRIN 'DISAPPOINTED' IN AMERICA'S PROGRESS SINCE APOLLO 11: 'WE HAVE THE NO. 1 ROCKET AND SPACECRAFT AND THEY CAN’T GET INTO LUNAR ORBIT'

The Presidential Medal of Freedom-holder attempts to avoid the escalating confrontation with his increasingly agitated adversary, asking bystanders to help "get this guy out of here."

Undeterred, the unkempt "investigator" has to reassure his clearly disturbed camera crew to "keep rolling" as he continues harassing Aldrin and his associates.

"You're the one who said you walked on the moon when you didn't," the self-proclaimed provocateur continues.

Then 72-year-old Aldrin pleads one last time between the wannabe detective’s stream of spittle for him to "get away," but the camel's back is about to break.

“You're a coward, and a liar, and a <mmmph> thief!" An expert right-hook from Aldrin forces the last word of that sentence back into the mouth from whence it came, and sends his cowardly accuser reeling.

Screenshot from YouTube video showing Apollo 11 Astronaut Buzz Aldrin punching a conspiracy theorist in 2002. The LA County District Attorney's office declined to pursue prosecution against Aldrin, saying the famed astronaut was provoked and unlikely to be found guilty by a jury given the evidence.

As you might imagine, the man who spent his afternoon harassing an American icon pressed charges against the septuagenarian who “assaulted” him.

Those charges, of course, were dropped a short time later when the LA County District Attorney's office found that the totality of the evidence suggested the encounter was instigated by Aldrin’s so-called victim, and that a jury would be unlikely to declare the legendary Apollo astronaut guilty in court.

Asked recently about the encounter, and the like-minded crackpots who doubt we ever landed on the Moon, Aldrin said in an interview with Fox's Neil Cavuto that "I don't pay any attention to them, really. They're out for themselves to make a name."