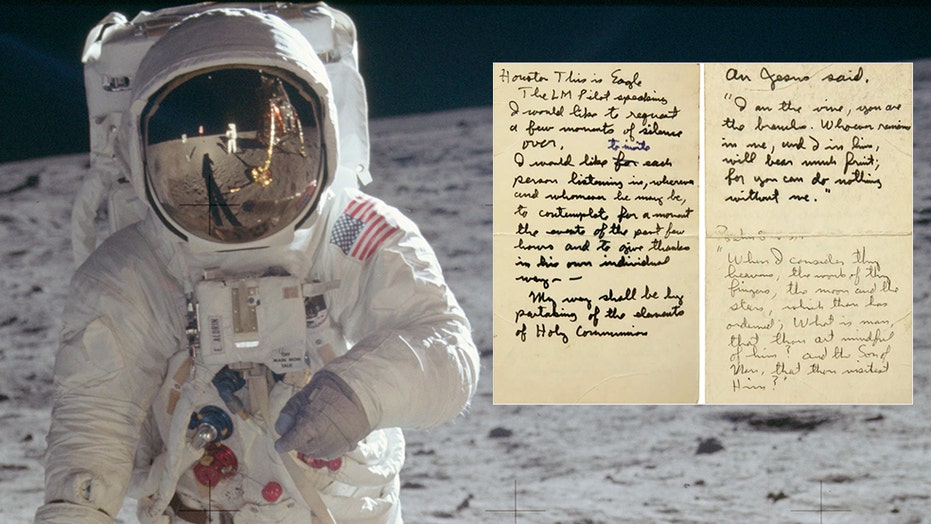 Fifty years ago, when American astronaut Edwin "Buzz" Aldrin, a devout Christian, made history landing on the moon, the first thing he did was give thanks to God.

Aldrin, seated next to Neil Armstrong, became the first person to celebrate a religious sacrament on a heavenly body outside Earth. The ordained Presbyterian elder wrote in a piece for Guideposts in 1970 he chose Holy Communion because his pastor at Webster Presbyterian, Dean Woodruff, often spoke about how God reveals Himself through the everyday elements.

"I wondered if it might be possible to take communion on the moon," Aldrin recalled a year after the mission, "symbolizing the thought that God was revealing Himself there, too, as man reached out into the universe. For there are many of us in the NASA program who do trust that what we are doing is part of God’s eternal plan for man."

This July 20, 1969 photo made available by NASA shows pilot Edwin "Buzz" Aldrin in the Apollo 11 Lunar Module. For the 50th anniversary of the landing, Omega issued a limited edition Speedmaster watch, a tribute to the one that Aldrin wore to the moon. (Neil Armstrong/NASA via AP)

And on July 20, 1969, after the Eagle lunar lander touched down on the surface of the moon, Aldrin pulled out the wafer that was in a plastic packet and the wine, along with a small silver cup provided by his church, which he kept in his "personal-preference kit," before he spoke into the radio, according to the Religion News Service.

“Houston, this is Eagle. This is the LM pilot,” Aldrin said, referring to the lunar module, shortly after the Eagle lunar lander touched down on the surface of the moon July 20, 1969.

Audio of Buzz Aldrin giving thanks shortly before taking Communion while on the moon. (Audio courtesy the Apollo 11 Lunar Surface Journal)

“I would like to take this opportunity to ask every person listening in, whoever and wherever they may be," Aldrin said, "to pause for a moment and contemplate the events of the past few hours and to give thanks in his or her own way."

Aldrin silently read from John 15:5, which he penned on a 3-by-5-inch notecard: “As Jesus said: I am the vine, you are the branches. Whoever remains in me, and I in Him, will bear much fruit; for you can do nothing without me.”

Aldrin then performed the ritual alone, which his dramatized in an episode of HBO's "From the Earth to the Moon," and played by Bryan Cranston. Armstrong watched but did not participate.

Buzz Aldrin's handwritten notes and scriptures flown to the surface of the moon, from a 3-by-5 inch buff-colored, lightweight card. Aldrin read John 15:5 while taking communion upon landing on the moon and read Psalm 8: 3,4 on his way back to earth. (Courtesy of Heritage Auctions)

"In the radio blackout I opened the little plastic packages which contained bread and wine," Aldrin said. "I poured the wine into the chalice our church had given me. In the one-sixth gravity of the moon, the wine curled slowly and gracefully up the side of the cup. It was interesting to think that the very first liquid ever poured on the moon, and the first food eaten there, were communion elements."

He later wrote NASA requested he not read the Bible verse "because of the O'Hair lawsuit," after Apollo 8 read 10 passages from Genesis about the creation of the world and an atheist sued. Although the lawsuit was eventually dropped, the space program was nervous about including any more faith declarations. But Aldrin managed to get another verse in before once again stepping foot on earth.

At the end of the mission, when Aldrin was headed back to earth, he read aloud a second verse, from the Old Testament, he scrawled on the same notecard, Psalm 8: 3-4: "When I consider thy heavens, the work of thy fingers, the moon and the stars, which thou has ordained; What is man that thou art mindful of him? And the Son of Man, that thou visitest Him?"

It's something that, to this day, causes the 89-year-old living legend, whose historic communion in 1969 is still commemorated every year at Webster Presbyterian, to wonder about.

"It was a privilege to have been able to undertake the first manned mission to the lunar surface, an honor to have worked with so many good and dedicated people, and to have left our footprints there," Aldrin told Florida Today earlier this week. "Even now, sometimes, I marvel that we went to the moon."