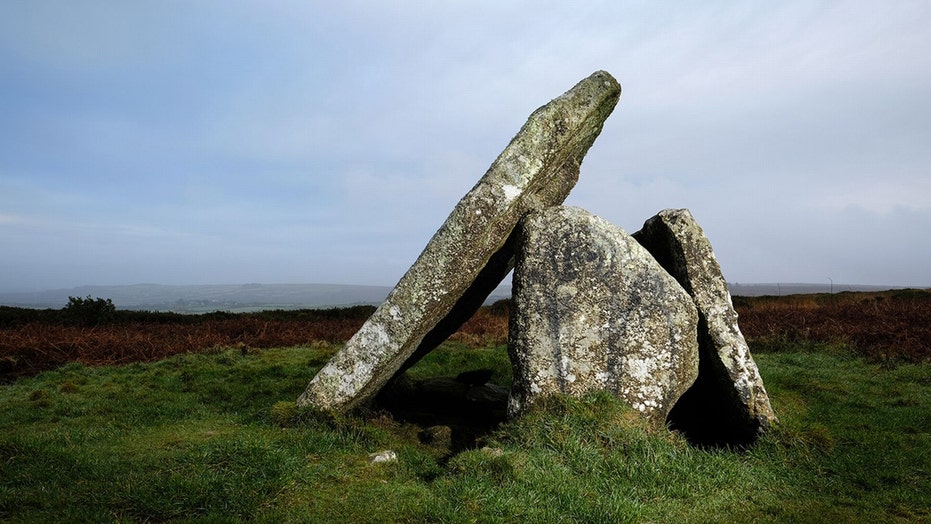 An ancient Stonehenge-style stone in West Cornwall, U.K., has been defaced with "alien" graffiti.

On part of the Mulfra Quoit, a Neolithic structure that is more than 5,000 years old, one of the granite stones was likely graffitied with grey paint, according to Cheryl Straffon, a member of the Cornish Ancient Sites Protection Network.

"These figures have been painted on one of the uprights of Mulfra Quoit," Straffon said in comments posted to the groups' Facebook page. "Fortunately it is grey paint that can be removed, but one wonders at the mentality of people who will disrespect an ancient site in this way!"

Graffiti which is thought to depict two alien figures has appeared on the ancient site of Mulfra Quoit in West Cornwalll. Vandals have caused fury by painting two ALIENS on stones at an ancient site. (Credit: SWNS)

Several Facebook commenters expressed their dismay at the vandalism. "Disgracefull!!!" said one person, while another said the actions were "mindless and disgraceful." Other people have donated money to help with the clean-up efforts.

"We have reported this graffiti to Historic England, and they are discussing ways that it can be safely removed," Straffon told British news agency SWNS.

The figures were daubed on one of the granite stones which is part of the Neolithic Mulfra Quoit - that are more than 5,000 years old. The graffiti has caused outrage among the local community and groups that work to protect and preserve the monuments.The stones were believed to have been deliberately targetted due its difficulty to reach up a steep hill in West Cornwall. (Credit: SWNS)

The site, which dates between 3500 to 2500 B.C., is the remains of a Neolithic dolmen, a type of megalithic tomb that likely had four large upright stones that supported a large horizontal capstone.