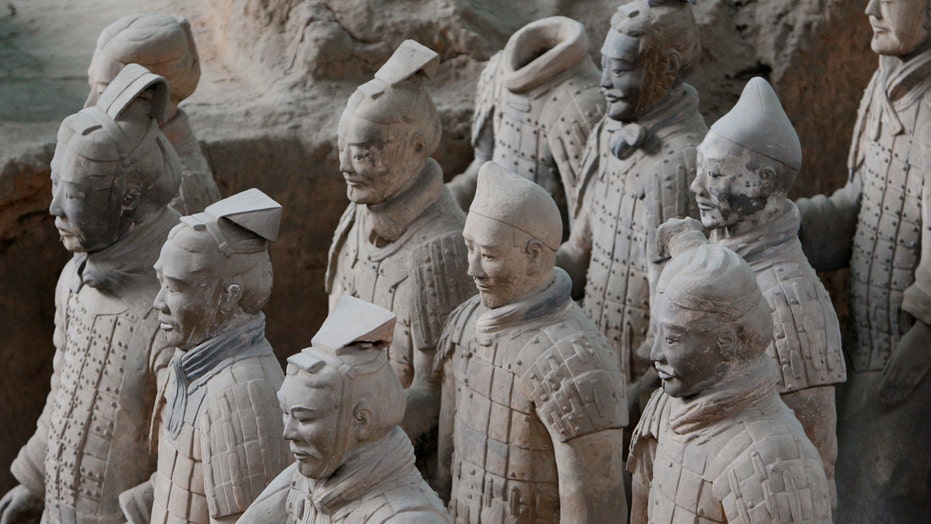 Archaeologists have unearthed evidence that ancient Greeks may have helped design the famous Terracotta Army, which could shed new light on China’s early contact with the west.

The 8,000 warriors guarding the tomb of China’s First Emperor Qin Shi Huang date back to the third century B.C. and have long fascinated historians. Experts now believe that the life-size figures may have been influenced by Greek art and that ancient Greek sculptors were even involved in their design.

The discovery of ancient European DNA in China’s northwestern Xinjiang region could force a rethink of the statues’ history, according to Li Xiuzhen, senior archaeologist at the Emperor Qin Shi Huang Mausoleum Site Museum. “We now have evidence that close contact existed between the First Emperor’s China and the west before the formal opening of the Silk Road,” she said, in a statement. “This is far earlier than we formerly thought.”

The Silk Road was officially opened for trade with the west in the second century B.C. The European DNA discovered in Xinjian province also suggests contact between China and the West around 1,500 years before Marco Polo’s famous journey to the court of Kublai Khan.

Xian, the capital of China’s Shaanxi province, is located in northwestern China.

Greek influences can also be found in terracotta acrobats and bronze figures of ducks, swans and cranes from the Emperor’s tomb. Experts also note that there was no tradition of building life-sized figures before Qin Shi Huang’s tomb was built in Xian.

Professor Lukas Nickel, chair of Asian Art history at the University of Vienna, told FoxNews.com that sculpture was little used in China when the tomb of the First Emperor was built, and realistic sculpture was not known at all. "The massive employment of sculpture in the mausoleum is totally unprecedented in Chinese tradition," he said. "This makes it likely that the skills necessary came not from China but from the outside."

Given the Terracotta Army clues, Nickel thinks that a Greek sculptor may have been at the site to train locals. He also believes that the First Emperor was influenced by the arrival of Greek statues in Central Asia with Alexander the Great during the fourth century.

"Besides the lack of any sculpture tradition and the historic opportunity of a direct encounter between both cultures, the most helpful evidence I did locate [was] in a record written about a century after the death of the emperor," Nickel said. "It states that the first sculptures the emperor made were intentional copies of other figures the Chinese had found at the Western end of the Chinese world."

Other evidence is found in bronze figurines of birds excavated from Qin Shi Huang’s tomb, which show manufacturing techniques from ancient Greece and Egypt that were previously unknown in ancient China.

“We now think the Terracotta Army, the acrobats and the bronze sculptures found on site have been inspired by ancient Greek sculptures and art,” said Xiuzhen, in the statement.

Archaeologists also believe that the tomb site is much larger than once thought, spanning a vast area of almost 38 square miles. Previously, the site was thought to be 22 square miles. Remote sensing technologies and ground penetrating radar also indicate that the First Emperor’s tomb lies undisturbed beneath a man-made pyramid and a huge structure with walls 476 feet long and on each side and 45 feet high. Tomb corridors were also found, which include concubines’ burial chambers, their living quarters, as well as a 216-foot-wide road leading to the site.

The Terracotta Army was first discovered in 1974.