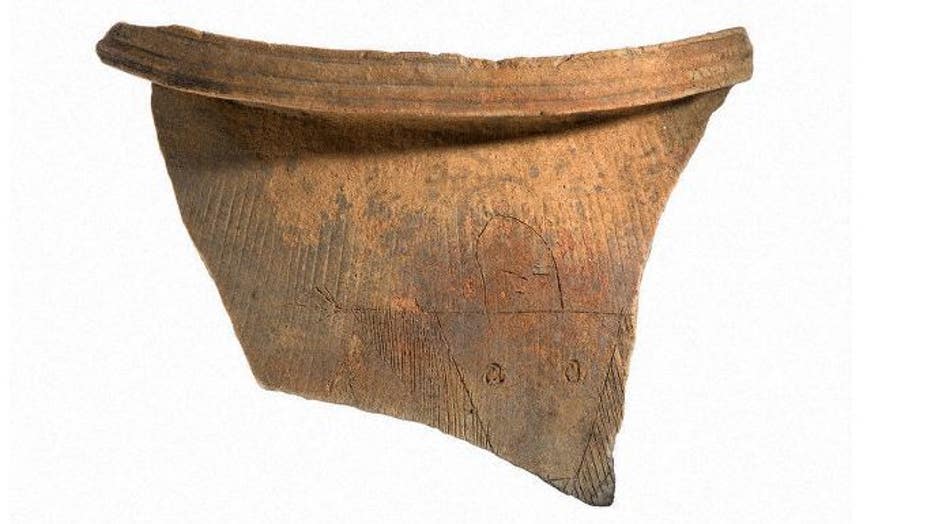 An earthenware piece bearing a drawing of what might be a female shaman was uncovered during excavation work in western Japan, local officials announced.

The discovery at the Shimizukaze ancient remains in Nara Prefecture was announced by the Tawaramoto municipal board of education, according to The Mainichi.

Officials said this is the first time that a shaman on this type of artifact is clearly thought to be a woman because it has breasts that are shown as circles.

Previously, 19 earthen vessels with drawings of shaman extending both arms have been unearthed across Japan, the Japanese daily newspaper reports.

A piece of an earthen vessel with a drawing of a possible female shaman is seen. (Tawaramoto municipal board of education)

The drawing is reportedly on a pottery fragment that measures only 12 centimeters by 16.3 centimeters, and dates back to the middle of the Yayoi period in 100 B.C. Also visivle are two eyes, a nose, a mouth and five fingers.

Kazuhiro Tatsumi, former professor of Doshisha University specializing in ancient studies, told The Mainichi, "They could have prayed for a rich harvest while flapping around."

The Shimizukaze site is north of the Karako Kagi site, and a total of over 450 earthen vessels with drawings have been found at the two sites.

The newly discovered piece with the drawing of a shaman is on display at the Karako Kagi archaeology museum in Tawaramoto until Dec. 1.