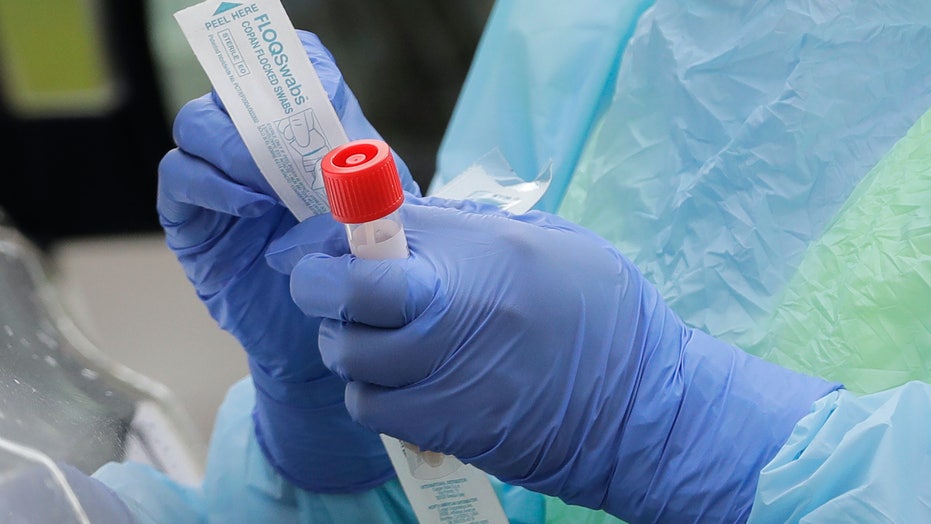 If the United States wants to restart the economy, the country must exponentially expand its testing capability and focus on those most likely to spread coronavirus, experts warn.

"The United States isn’t performing anywhere near enough tests. Worse still, we are testing the wrong people. To safely reopen closed businesses and revive American social life, we need to perform many more tests—and focus them on the people most likely to spread COVID-19, not sick patients," write oncologist Ezekiel Emanuel and Nobel Laureate economist Paul Romer in DefenseOne.

In this file photo a nurse holds a vial and a swab at a drive-up coronavirus testing station at a hospital in Seattle. (AP Photo/Ted S. Warren)

The authors cite a report from a Harvard professor and a Morgan Stanley analyst who both call for at least 500,000 tests per day in America. Romer believes the U.S. needs the capacity to run 20 to 30 million tests per day.

The Centers for Disease Control and Prevention currently gives priority to patients who are already hospitalized and symptomatic health care workers, then high-risk patients, such as those over 65 or those suffering from other health conditions.

"This is an enormous mistake. If we want to control the spread of COVID-19, the United States must adopt a new testing policy that prioritizes people who, although asymptomatic, may have the virus and infect many others," the authors write in DefenseOne.

Romber and Emanuel suggest that testing be dramatically expanded to focus on four core groups: all health care workers and first responders; all workers who maintain essential supply chains and insfrastructure; all potential super-spreaders, people who are asymptomatic who may be in contact with large numbers of others; and lastly, all those who are planning to return to the workplace.

"By one estimate, 3 million people work in grocery stores. To screen everyone in these two groups once a week will require about 1 million tests a day. We currently lack the infrastructure for that. And that is before we add the approximately 800,000 police officers, 290,000 bus drivers, and 60,000 sanitation workers—and patients without any symptoms in the health-care system," the authors write.

How could the U.S. possibly scale up testing that quickly? They offer some suggestions.

Congress could award $150 million in unrestricted research funds to the first five universities that can process 10 million tests in a week or less in the next stimulus package. Lawmakers could approve susidies for businesses that agree to test all their employees as they return to work. In addition, a significant amount of contact-tracing would need to be performed, at scale.

"If we adopt and follow a coherent plan, we can have a testing regime that keeps us safe without compromising our freedoms," Emanuel and Romer write. "But what Americans must not do is assume that the current rate of testing is sufficient to bring our society back to life. Until the United States can successfully perform a lot more tests—and starts testing the right people—the public will have little reason to believe that the virus is in check."