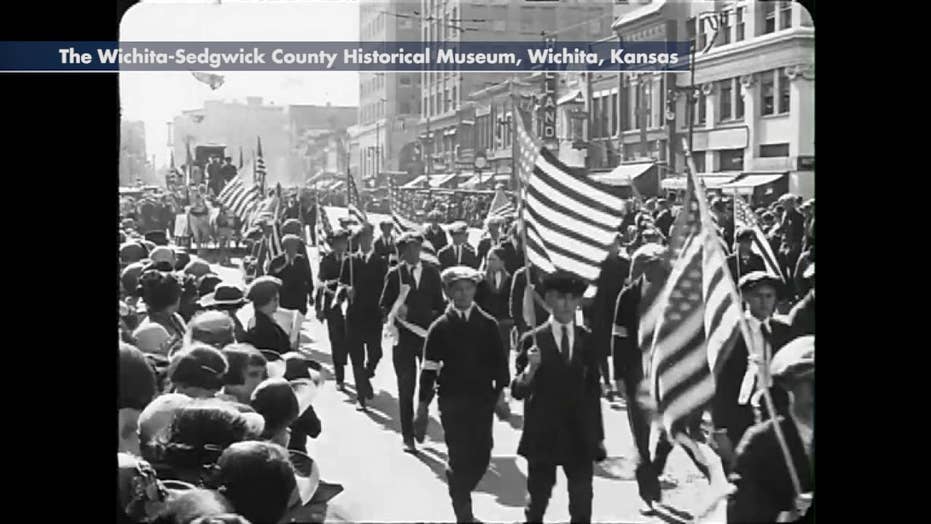 Raw video: Rare piece of footage found in an Arkansas City junk store shows a parade marching through Wichita in 1924.

Incredible film footage discovered in a junk shop shows a 1924 parade in Wichita in stunning detail.

The Wichita Eagle reports that the film was found in an Arkansas City junk shop.

The 5-minute silent video was posted to YouTube by the Wichita-Sedgwick County Historical Museum. Crowds of onlookers are seen watching the “Boys Loyalty Parade,” that took place on May 1, 1924. A celebration of youth, the parade features marching bands, floats and even bicyclists. At various points, streetcars and early 20th-century cars and trucks can be seen passing by.

EXTREMELY RARE PHOTO OF BILLY THE KID AND PAT GARRETT SURFACES, COULD BE WORTH MILLIONS

Groups taking part in the parade include the American Indian Institute, Boy Scouts, Kiwanis, Lions Clubs, YMCA and local schools. The museum notes that an unidentified group of young African-American men and an unidentified girls and boys band also participate.

Officials can also be seen at the parade. “Later footage shows the group swearing allegiance to the flag in what looks like a park,” the museum adds.

The footage offers a fascinating snapshot of life in the city in 1924.

Similar Boys Loyalty Parades took place across much of the U.S. on May 1, according to the Wichita Eagle.

The Wichita Eagle reports that the 35 mm film was brought to the museum in December by an Arkansas City resident, who had found it in a junk shop for $10.

With the help of the Kansas Historical Society in Topeka, the museum was able to find a company in Denver, which digitized the antiquated nitrate film.

The end result is incredibly clear footage of an event that took place almost 100 years ago.