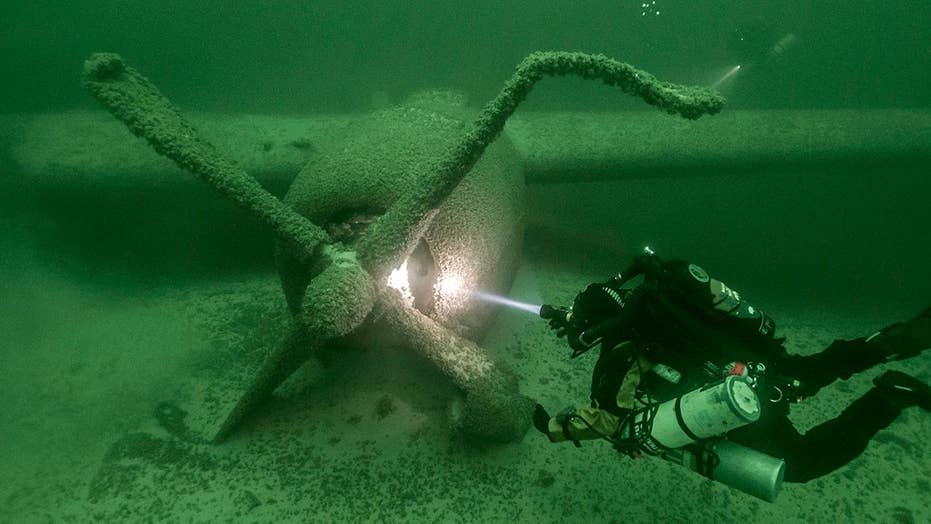 70 years after B-29 crash, new footage of wreck is released

The B-29 Superfortress Bomber was conducting scientific tests when it crashed into the lake 70 years ago.

LAS VEGAS – Lake Mead claims many feats, including being the country’s largest man-made reservoir and the nation’s deadliest national park (according to an Outside Magazine count of fatalities over a 10-year span). But there’s a jewel at the bottom of its depths that is attracting renewed attention.

Seven decades after a B29 Superfortress Bomber plane crashed over the lake, the wreckage remains intact at the bottom. In commemoration of the 70th anniversary, the National Park Service released new videos from the underwater wreck site.

Flying a scientific mission to test the trajectory of intercontinental ballistic missiles and nuclear warheads, the crew of five crashed on July 21, 1948 after flying too close to the surface of the water. An incorrectly calibrated altimeter and pilot error were later to blame for the crash, however all passengers survived.

The wrecked plane remains a popular destination area for professional scuba divers – but only those with a permit are allowed to see it up close. Conservationists say they plan to keep it at its current location, but the park has temporarily stopped issuing permits.

“Cold, freshwater preserves things very well and it’s in good condition where it is and we don’t see any reason to bring it up,” said David Conlin, chief of the National Park Service’s Submerged Resources Center. “It’s in the best interest of the plane itself to stay where it is.”

The mission that day took off from Armitage Field in Inyokern, Calif., 140 miles west of Las Vegas. The flight was part of the military’s Upper Atmosphere Research Project that was measuring data from a secret ballistic-missile guidance system known as the “suntracker.” Testing involved the plane repeatedly ascending 35,000 feet, then dropping to just 100 feet above the lake. Theories suggest that the reflection of the sun on the surface of the lake may have caused the captain to lose his depth perception, crashing into the water at 230 miles per hour. Divers didn’t find the plane for more than half a century, discovering the site in 2002.

“This was really the beginning of the Cold War, it was the dawn of the space race, all that scientific information was used to help America move forward, both to put Americans on the moon and to defend our country,” Conlin said.

When Conlin and his team of divers mapped the area and documented the site in 2003, he described it as “the coolest thing I’ve ever seen underwater.”

“The plane looked like a spaceship sitting on the bottom of the lake,” Conlin said about the first time he saw it. “It looked like the Millennium Falcon.”

The historically low levels of Lake Mead have made the wreck site a haven for professional divers. The National Park Service has issued permits in the past to a limited number of highly skilled divers. This year, however, they are devoting a period of study to improve preservation efforts and, for now, have stopped issuing permits.

Divers use to have to plunge to about 220 feet to reach the wreck site. Now, that descent doesn’t take nearly as long sitting, currently it’s at 105 feet below the surface.

But, the allure is alive and well – especially for residents of Las Vegas and surrounding communities. Betty Gripentog was 17 years old when the crash occurred and remembers the news reports.

“It was in the newspaper and I don’t remember that it created a lot of interest,” she said, “but the story has been on for a long, long time about the crash and about it being a secretive plane.”

As for the B-29, there are only 26 surviving in complete form today, of which only two are able to still fly. The rest are on static display.

In its heyday, the plane was used to drop the atom bomb on Japan. But fast-moving military technology quickly rendered the prop-driven plane obsolete – particularly when the jet engine was invented.

A B-29 Superfortress Bomber in its heyday, which spanned the end of World War II and into the Korean conflict

“The others were faster and could achieve higher altitudes,” said Susan Edwards, archaeologist and historian at the Desert Research Institute.

The National Park Service is the plane’s only custodian and the wreck site is under consideration for National Historic Landmark designation. But for the other oddities wallowing in the lake – including a school bus, an old ferry, and a flying boat – none share the same high distinction as the historic relic that is the B-29.

“We just really want to bring out a really neat story,” Conlin said, “and get people thinking maybe there’s all sorts of hidden jewels at Lake Mead and other national parks.”