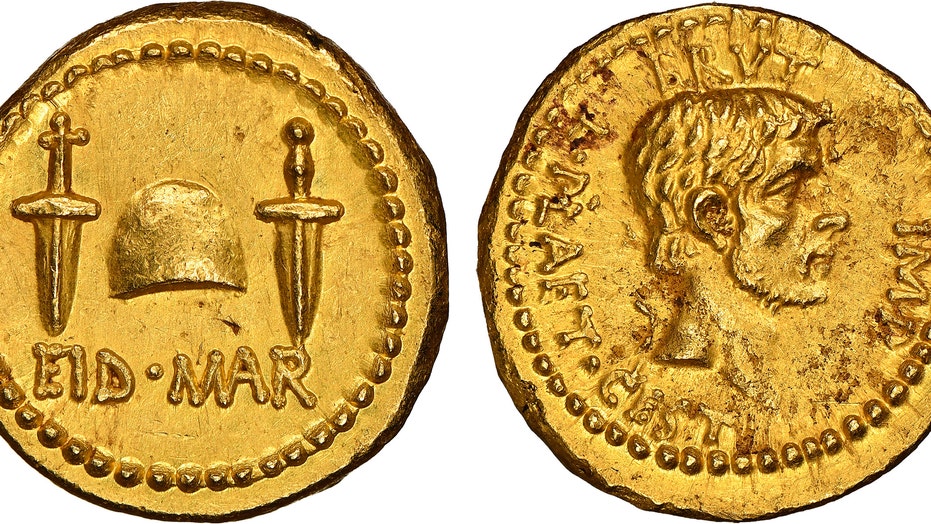 An extremely rare Roman coin commemorating the assassination of Julius Caesar has surfaced and may be worth millions of dollars, according to coin experts.

“It was made in 42 B.C., two years after the famous assassination, and is one of the most important and valuable coins of the ancient world," said Mark Salzberg, chairman of Sarasota, Fla.-based Numismatic Guaranty Corporation, which confirmed the coin’s authenticity, in a statement obtained by Fox News. The front has a portrait of Marcus Junius Brutus, one of Caesar’s assassins, and the other side dramatically has two daggers and the words EID MAR, a Latin abbreviation for Ides of March."

Numismatic Guaranty explains that nearly 100 Ides of March coins in silver are known, but the coin is only the third known example in gold.

The mint condition coin, which had been in a private collection in Europe, will be auctioned by London-based Roma Numismatics on Oct. 29.

"The conservative pre-auction estimate is £500,000 ($647,173, €548,511), but considering the coin’s rarity, artistry, and fabled place in history I would not be surprised if it sold for several million,” Salzberg added in the statement.

In October 2019, a pair of 2,000-year-old Roman scrolls believed to have belonged to Caesar's family that were buried and charred during Vesuvius' eruption, were virtually "unwrapped" for the first time ever.

Ancient coins have been garnering plenty of attention in recent years. Earlier this year, for example, a rare coin from an ancient Jewish revolt against the Roman Empire was discovered in Jerusalem.

In 2017, a rare Roman coin was discovered on a remote Scottish island.