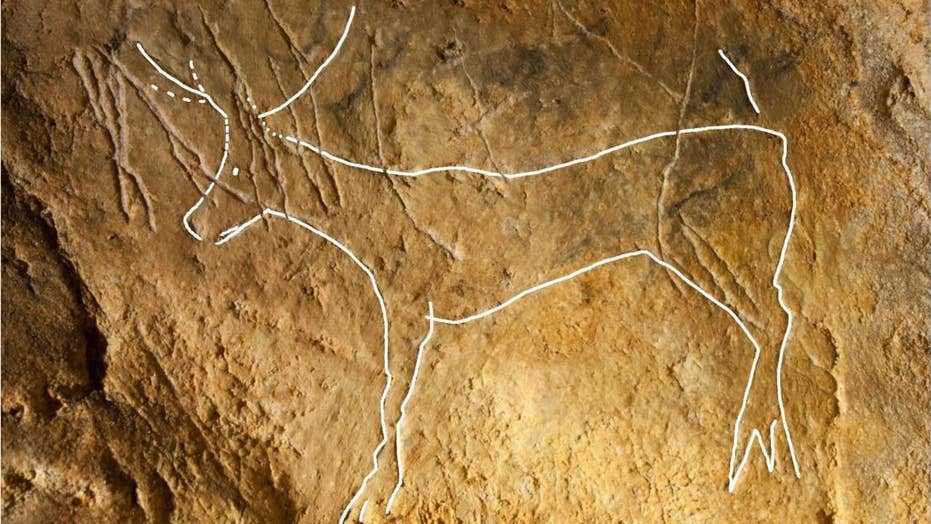 Archaeologists have uncovered cave drawings located in eastern France that are more than 12,000 years old, but were hidden for hundreds of years thanks to graffiti.

At least with these drawings, you'll be proud to display them on the fridge.

Archaeologists have uncovered cave drawings located in eastern France that are more than 12,000 years old, but remained hidden for hundreds of years under graffiti.

The graffiti was likely from the 16th to 19th centuries, researchers said in a statement.

Researchers had long suspected that the region was home to cave drawings, but thanks to modern scanning techniques, including the use of special image-processing computer programs, they were able to find the drawings. "Because the frequency of palaeolithic sites is particularly high here, researchers have suspected for some time that there would be a cave with paintings in it,” said Professor Harald Floss of Early Prehistory and Quaternary Ecology, who helped discover the findings.

The findings were published in the book "Palaeolithic Rock and Cave Art in Central Europe?"

The prehistoric images that were uncovered are of a horse and a deer and are likely to be from the latter part of the most recent Ice Age. The researchers used carbon-14 dating to determine the age of the paintings.

Known as the Pleistocene Epoch, it is generally defined as starting 2.6 million years ago and ending approximately 11,700 years ago

Speaking with Live Science, Floss added that the graffiti that covered the drawings were largely inscriptions of names and dates with some figurative pictures.

The researchers said that although the southern Burgundy region of France has been explored for more than 20 years, these uncovered cave paintings could provide clues about interactions between humans and their ancestors, the Neanderthals.

“Early modern humans were guided by rivers as they spread across the continent,” said Floss. “They may have migrated here from the east via the Danube and from the south via the Rhône. Our data suggest that Neandertals and early modern humans could have met here in eastern France.”

Ancient cave drawings reveal a window into the past, particularly how early humans lived.

A 40,000-year-old 5-foot wide sketch of a bull-like beast was recently found on the wall of a cave in the Indonesian part of Borneo. It is the oldest example of an animal drawing, according to experts.

In September, the earliest-known drawing made by a human was found in a South African cave. It looks very similar to a hashtag, the grouping and search feature made popular by the Jack Dorsey-led Twitter.