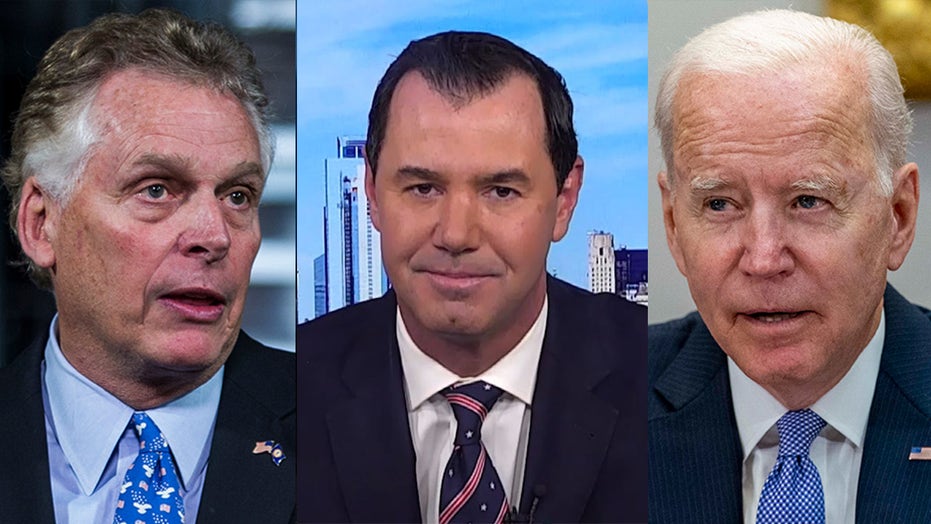 Republican Glenn Youngkin has moved ahead of Democrat Terry McAuliffe in the Virginia governor’s race, less than a week before the election.

That’s a big shift from two weeks ago, when McAuliffe was ahead by five, 51-46 percent.

Likely voters are a subgroup of registered voters, identified mainly based on self-reported vote intention and interest in the election.

What changed?  GOP enthusiasm.  The race is largely focused on education and this has energized Republicans, as 79 percent of Youngkin supporters are "extremely" interested in the election compared to 69 percent of McAuliffe supporters.

Democratic pollster Chris Anderson says if Democrats sense defeat, enthusiasm could shift in the final days of the campaign.

"With the race essentially tied among the full registered voter universe, McAuliffe could still pull this off," says Anderson, who conducts the Fox News survey along with Republican Daron Shaw. "But it would take something big to ignite enthusiasm for McAuliffe’s candidacy and a massively effective get out the vote effort."

Youngkin promises to ban the teaching of critical race theory on his first day in office, while McAuliffe denies CRT is even taught in Virginia schools.  In addition, McAuliffe is still explaining his comment in the final debate that parents shouldn’t "be telling schools what they should teach."

The survey, released Thursday, finds movement in the views of parents.  They backed McAuliffe by 10 points two weeks ago.  Now, they go for Youngkin by 14.  On the question of which candidate they trust to handle education, Youngkin’s previous 1-point edge among parents has widened to 12.

Among parents, Youngkin has dads to thank.  Moms back him by just two points overall, and they trust both candidates equally on education.  For dads, those numbers are +23 and +21 for Youngkin respectively.

GLENN YOUNGKIN: MCAULIFFE TELLING VIRGINIA PARENTS ‘SIT DOWN, BE QUIET, I DON’T CARE WHAT YOU THINK’

"Education is a top issue, which is usually good news for the Democrats since they are typically seen as more capable in that domain," says Shaw. "But Youngkin has turned the issue on its head so it’s about curriculum and parent involvement rather than spending. The result is the GOP is currently preferred on perhaps the critical issue for this election."

Among all likely voters, trust on education moved from McAuliffe by two points to Youngkin by eight.

The survey finds similar shifts in the last two weeks on other issues measured.  The candidates are roughly even on coronavirus (Youngkin +1).  McAuliffe had been favored by 12 points.

On the economy, more voters trust Youngkin by 11 points, while the candidates tied previously.

TRUMP, BIDEN, NOT ON THE BALLOT, BUT CENTER STAGE IN VIRGINIA GUBERNATORIAL SHOWDOWN

Youngkin also comes out on top on handling crime (by 12 points).

A majority of the small subgroup of independents prefers Youngkin, a reversal from earlier this month when they narrowly went for McAuliffe.  Despite the group’s small size, the Republican’s current 22-point advantage is significant.

In 2017, Gov. Ralph Northam won women by 19 points, moderates by 25, and Black voters by 85, according to the Fox News Voter Analysis election survey.  His Republican opponent Ed Gillespie won men by 3 points, whites without a college degree by 27, and White evangelical Christians by 55.

Almost all McAuliffe and Youngkin backers (95 percent each) are certain of their vote choice, and both receive huge support from their party faithful (93 percent of Democrats and 95 percent of Republicans respectively).

Most of those voting in-person support Youngkin (56 percent), while a majority voting by mail go for McAuliffe (74 percent).

One in four reports having already cast their ballot either early in-person or by mail and McAuliffe leads this group by 26 points.  Youngkin is ahead by 28 points among those planning to vote on Election Day.

President Joe Biden’s job rating is underwater among likely voters by 13 points:  43 percent approve and 56 percent disapprove.  It was 50-49 percent in mid-October.

The last time Republicans won a statewide election in Virginia was 2009.

Conducted October 24-27, 2021 under the joint direction of Beacon Research (D) and Shaw & Company (R), this Fox News survey includes interviews with 1,212 Virginia registered voters randomly selected from a statewide voter file, who spoke with live interviewers on landlines and cellphones. A subsample of 1,015 were classified as likely voters.  The margin of sampling error is plus or minus 2.5 percentage points for the registered voter sample and 3 points for likely voters.