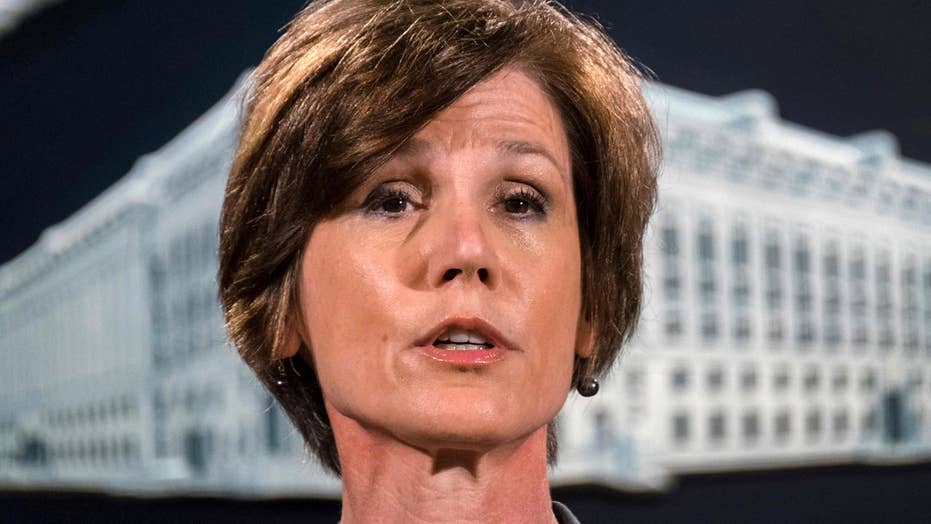 Yates to testify on Russian interference in 2016 election

President Trump and members of the Obama administration clashed Monday ahead of testimony from a former official expected to excoriate ousted adviser Michael Flynn, with the president swiping at the witness and other ex-Obama officials leaking to the media that Trump was warned about Flynn -- by Barack Obama himself.

The latest statements and stories reflect the current and former administrations still battling to control the narrative on the ever-evolving controversy over Russian meddling in the 2016 campaign.

In her testimony Monday afternoon, former acting Attorney General Sally Yates is expected to tell a Senate Judiciary subcommittee probing Russian interference in the presidential race that she alerted the Trump administration about contacts between Russia and Flynn, the short-lived national security adviser. Trump on Twitter sought to undermine her testimony by suggesting she may have leaked classified information.

“Ask Sally Yates, under oath, if she knows how classified information got into the newspapers soon after she explained it to W.H. Counsel,” Trump wrote.

He was likely referring to a disputed Jan. 26 exchange in which Yates told White House Counsel Don McGahn about Flynn’s contacts. The Trump administration described this encounter as Yates giving McGahn a “heads–up.” Yates is likely to testify that she expressed alarm and delivered the information as more of a warning. That meeting quickly made its way into news accounts, fed to reporters by anonymous sources.

But just hours after Trump fired his initial volley, multiple reports emerged that Obama also personally warned Trump about Flynn during the Obama-Trump meeting in the Oval Office on Nov. 10. Each article quoted multiple anonymous sources from the Obama administration. Flynn had previously served as head of the Defense Intelligence Agency under Obama, but had been fired. Flynn retained his security clearance even after the sacking, however.

Trump fired Flynn in February after he misled Vice President Pence about a conversation he had with a Russian official during the transition period. However, Trump has remained publicly protective of Flynn, who was one of Trump’s top advisers and surrogates during the presidential election.

Asked Monday about the claims Obama warned Trump about Flynn, White House Press Secretary Sean Spicer said, “Obama made it known that he wasn’t exactly a fan of General Flynn’s.” But Spicer also questioned that administration’s current claims, asking if Obama was so worried, “Why didn’t he suspend General Flynn’s security clearance, which they had just re-approved months earlier?”

Spicer added: "Not only did they reaffirm that security clearance, they took no steps to suspend it or take any other action."

Trump is reportedly unhappy many White House officials have been willing to cast Flynn to the wolves, according to Axios, citing a source familiar with the president’s thinking. Part of Trump’s expected pushback was to highlight that Flynn’s 2015 trip to Russia was carried out under a security clearance granted by the Obama administration. Trump enacted that strategy Monday morning, too.

“General Flynn was given the highest security clearance by the Obama administration – but the Fake News seldom likes talking about that,” Trump tweeted.

Yates is set to testify Monday alongside James Clapper, who served as director of national intelligence during the Obama administration.

Trump fired Yates, who had been appointed deputy attorney general by former President Barack Obama, in late January after she refused to defend the president’s travel ban executive order in court.