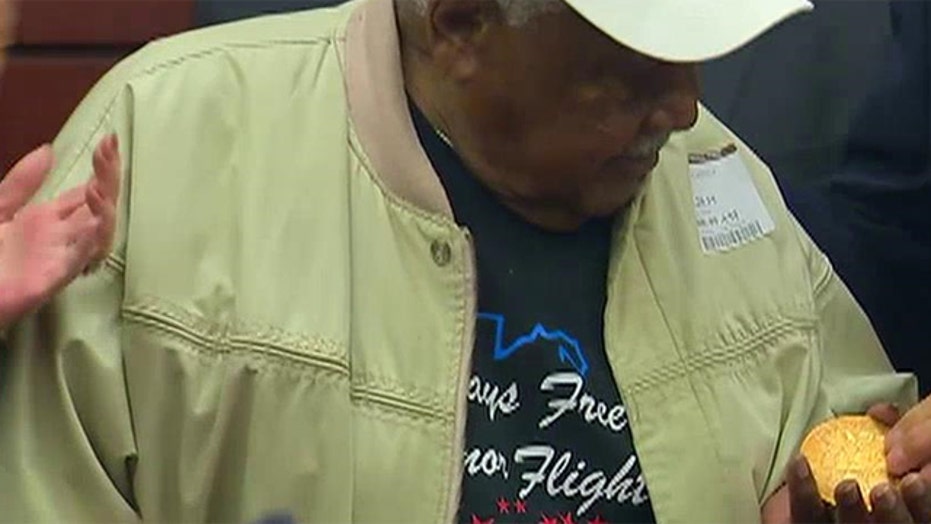 Sgt. John Watson was a Tuskegee airman but wasn’t recognized until today

More than a half-century later, a World War II veteran from West Virginia was at last recognized as a member of the legendary Tuskegee Airmen on Wednesday.

During the war, Watson served as an aircraft crew chief in support of the first African-American combat pilots, known as the Tuskegee Airmen. He has long considered himself a member of the group, but never received any official praise or commendation.

Initially, Watson got on the computer himself, to try and figure out how someone with his service record as part of the group could officially become recognized. But with little technical expertise, that initial search didn't take Watson very far.

His relatives, however, then reached out to Sgt. Paul Dorsey, vice president of the "Always Free Honor Flight,"  who was able to get word to someone at the office of Sen. Joe Manchin, D-W.Va.

"He knew he was there," Manchin explained. "He knew he did his duty and did it well and had succeeded, but he had never been truly honored as a Tuskegee Airman."

Manchin's staff was able to expedite a review process that normally takes several months. The Tuskegee Airman Association ensured Watson was, in fact, part of the historic group, so the veteran could be feted during an Honor Flight to Washington, D.C. on Wednesday.

There are fewer than 200 Tuskegee Airmen still alive, according to a January 2015 tally.

Shortly after receiving his Congressional Gold Medal, Watson was overwhelmed with gratitude.

"I appreciate everyone that had the minute-ist interest in it," Watson said. Three-dozen members of the American Fighter Aces -- elite fighter pilots who fought in several wars -- were also honored Wednesday with the Congressional Gold Medal.